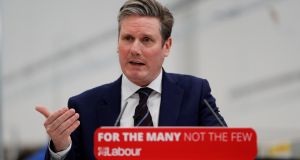 Britain’s shadow Brexit secretary Keir Starmer: “Having lost not just one election, but having lost four, and having lost the last one badly, the rebuild through to probably 2024 is huge.” Photograph: Darren Staples/Reuters

At 10.45am on Saturday, after a three-month campaign that passed mostly under the radar of the British public, the next leader of the Labour Party will be named. The announcement will come in the form of a press release with a link to a pre-recorded video message by the successful candidates for leader and deputy leader.

Opinion polls, anecdotal evidence and the private predictions of all the campaigns point to clear victories for shadow Brexit secretary Keir Starmer as leader and shadow education secretary Angela Rayner as deputy leader. The fact that the result has been seen as a foregone conclusion for so long has helped to drain much of the drama out of the contest and the coronavirus has pushed it to the margins of the news agenda.

The coronavirus crisis has, however, made the election more consequential than before and Conservative MPs admit privately that a Starmer-led Labour Party now has a real chance of driving the government from office in 2024. There is talk in Whitehall of inviting Starmer to take part in some of the Cobra emergency group meetings about the epidemic and even some speculation about a national unity government.

The government’s economic policy response to the crisis, which has seen a state intervention in the economy unprecedented in peacetime, will make it difficult for Boris Johnson to portray Starmer’s Labour as a party of statist spendthrifts. And while a new opposition leader would normally lament the lack of media attention due to the coronavirus, Starmer might benefit from staying out of the spotlight at the start of his leadership.

His first action is expected to be a purge of many of Jeremy Corbyn’s allies from the shadow cabinet and from the party bureaucracy. Starmer’s clear-out will not be motivated by ideology – he comes from Labour’s soft left and is comfortable with most of Corbyn’s policies – but out of a determination to stamp out factionalism.

His margin of victory over shadow business secretary Rebecca Long-Bailey, the Corbynite candidate, and backbencher Lisa Nandy could determine how much leeway Starmer enjoys in reshaping the party’s hierarchy.

“I have tried to run a disciplined, positive and professional campaign, and I’m going to carry on doing that,” he told the New Statesman this week.

“What comes after that is for whoever emerges as leader of the Labour Party, but I am well aware of the scale of the task. Having lost not just one election, but having lost four, and having lost the last one badly, the rebuild through to probably 2024 is huge. That will require change.”

Although some former Labour MPs who lost their seats last December blame Starmer for pushing the party towards advocating a second Brexit referendum, he accepts that the battle over leaving the European Union is now over. The coronavirus has the potential to change the debate about Britain’s future relationship with the EU, as the negotiating timetable is likely to slip.

Starmer is unlikely to call on Johnson to request an extension to the transition period beyond the end of this year but the prime minister could be left with no option but to extend it. As the bitterness of the Brexit debate is replaced by a sober assessment of the economic consequences of the coronavirus, Britain could become receptive to the case for maintaining a close economic relationship with the EU and Starmer will be ideally placed to make it.