UK election: Chief Rabbi says ‘soul of the nation is at stake’ if Labour win 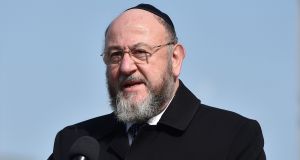 The Chief Rabbi of the UK has warned that the “soul of the nation is at stake” if Labour gains power in the General Election.

In an article for The Times, Ephraim Mirvis criticised Jeremy Corbyn for being “complicit in prejudice” and “unfit for office”.

He added that British Jews are “gripped by anxiety” at the prospect of a Corbyn-led government after the December 12 poll.

The Labour leadership and the party’s structures have been accused of failing to tackle complaints of anti-Semitism quickly enough since Mr Corbyn took charge and several MPs have quit the party over the issue.

Mr Mirvis said people of the Jewish faith have expressed “justified” concern about anti-Semitism in the Labour Party.

He said: “Of course, the threats of the far-right and violent jihadism never go away, but the question I am most frequently asked is, ‘What will become of Jews and Judaism in Britain if the Labour Party forms the next government?’

“Raising concerns about anti-Jewish racism in the context of a General Election ranks among the most painful moments I have experienced since taking office.”

The Chief Rabbi criticised Mr Corbyn for an “utterly inadequate” response to anti-Semitism within Labour.

He concluded: “I simply pose the question: What will the result of this election say about the moral compass of our country?

“When December 12 arrives, I ask every person to vote with their conscience. Be in no doubt, the very soul of our nation is at stake.”

A Labour spokesman said: “Jeremy Corbyn is a lifelong campaigner against anti-Semitism and has made absolutely clear it has no place in our party and society and that no-one who engages in it does so in his name.

“A Labour government will guarantee the security of the Jewish community, defend and support the Jewish way of life, and combat rising anti-Semitism in our country and across Europe. Our race and faith manifesto sets out our policies to achieve this.” – PA