‘It’s bittersweet, I can’t believe I would have to welcome my son back like this’

Friends and family of the 39 Vietnamese people found dead in the back of a British truck last month mourned, as the first of the bodies were returned to Vietnam. Police there have arrested 10 people in connection with the deaths. Video: Reuters 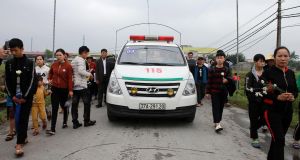 An ambulance carrying the body of Nguyen Van Hung is surrounded by villagers in Dien Thinh commune, Dien Chau district in Nghe An province, Vietnam, on Wednesday. Photograph: EPA

The bodies of 16 of the 39 Vietnamese who died when human traffickers carried them by lorry to the UK last month were repatriated to their homeland on Wednesday and have been taken to their families.

The bodies arrived on a flight that landed in Hanoi, Vietnam’s capital, the news website VNExpress reported.

The website published photos of ambulances that transported the bodies to their home provinces south of Hanoi.

The bodies were found on October 23rd in the English town of Grays, east of London.

Police say the victims were aged between 15 and 44.

The 31 men and eight women are believed to have paid human traffickers for their clandestine transit into the UK.

Several suspects have been arrested in the UK and Vietnam.

Hoang Lanh, father of 18-year-old victim Hoang Van Tiep, said by phone that he had been informed by a local government official that his son’s remains would be brought home Wednesday, along with those of six other victims from Dien Chau district in Nghe An province, including Mr Tiep’s cousin Nguyen Van Hung.

“It’s bittersweet, I can’t believe I would have to welcome my son back like this,” Mr Lanh said.

“I’m devastated but I am happy to have him back with us soon.”

“We are very sad, but we are happy now that he has been brought back to the place where he was born to be with his family and surrounded with love from the family,” she said.

“He wouldn’t be able to rest in peace if he had still been in England. ”

Another victim’s family expressed their sadness ahead of receiving the bodies of their loved one.

“I have been sad for a month and I can’t eat anything,” said Nguyen Thanh Le, father of Nguyen Van Hung (33).

“My son died far away from his home and I had to wait for a long time, but today his body is coming back and tomorrow is the funeral.”

Legal proceedings in the case are continuing in the UK.

On Monday in London, a lorry driver who allegedly was the driver of the vehicle in which the 39 bodies were found pleaded guilty to plotting with others to assist illegal immigration and acquiring criminal property.

Northern Irish truck driver Maurice Robinson accused of being part of an international people-smuggling ring, was not asked to enter pleas to 39 counts of manslaughter and conspiracy to traffic people.

Police say he drove the cab of the vehicle to the port of Purfleet, where it picked up the container, which had arrived by ferry from the port of Zeebrugge in Belgium.

Also on Monday, British police said they had arrested a 36-year-old man on suspicion of manslaughter, conspiracy to traffic people and conspiracy to assist unlawful immigration.

Two other men have been arrested in Britain and Ireland in connection with the case. – PA