Violent anti-racism protests will not be tolerated, says Priti Patel 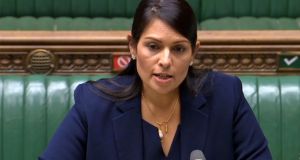 Home secretary Priti Patel gives a statement to the House of Commons, on Monday, on the public disorder at the Black Lives Matter protests over the weekend. Photograph: Stringer/PRU/AFP via Getty Images 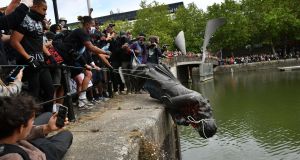 A statue of Edward Colston is thrown by protesters into Bristol harbour during a Black Lives Matter protest rally on Sunday. Photograph: Ben Birchall/PA Wire

Britain’s home secretary Priti Patel has warned that “justice will follow” anyone involved in violent incidents on the fringes of anti-racism protests in recent days. Speaking in the House of Commons on Monday, she said anyone engaged in assaults on police officers would face the full force of the law.

“We strongly support the right to protest peacefully, but that does not extend to the violent behaviour that we have witnessed across the country throughout the weekend. Any assault on our brave police is completely unacceptable. Any perpetrator should be in absolutely no doubt that they will be arrested and prosecuted.

“Assaults on emergency workers must be handled with the appropriate severity by the entire criminal justice system in a consistent way, and this government will go even further, as we have committed to consult shortly on doubling the minimum sentence for those who assault emergency workers, in order to ensure that the sentence truly fits the crime,” she said.

Ms Patel’s comments followed a weekend that saw large, mostly peaceful anti-racism demonstrations in a number of British cities. In Bristol on Sunday, demonstrators toppled a statue of the slave trader Edward Colston. In London, some protesters painted graffiti on a statue of Winston Churchill and a demonstrator attempted to remove a flag from the Cenotaph.

The home secretary described the incidents as hooliganism and said there was no justification for removing Colston’s statue without the approval of local elected representatives.

“There is no excuse for pelting flares at brave officers, throwing bikes at police horses, attempting to disrespect the Cenotaph or vandalising the statue of Winston Churchill, one of the greatest protectors of our freedoms who has ever lived. It’s not for mobs to tear down statues and cause criminal damage in our streets, and it is not acceptable for thugs to racially abuse black police officers for doing their jobs. The criminals responsible for these unlawful and reckless acts are betraying the very cause they purport to serve,” she said.

The toppling of Colston’s statue has led to calls for the removal of a statue of a notorious former governor of Trinidad, Thomas Picton, from the city council headquarters in Cardiff and of slave owner Henry Dundas from St Andrew Square in Edinburgh. Labour’s shadow home secretary, Nick Thomas-Symonds, said he disapproved of the way Colston’s statue was removed in Bristol but that he was happy that it was gone.

“We cannot allow this moment of global demand for justice to pass without action and we on these benches will be at the forefront of calls for change. What is never the solution, though, is violence and vandalism. The vast majority of protesters are peaceful, but some of the actions we have seen from a minority are unacceptable. I condemn those who have attacked the police and I want to pay tribute to the police officers putting themselves in harm’s way over the weekend,” he said.