Face coverings to be mandatory on public transport in England 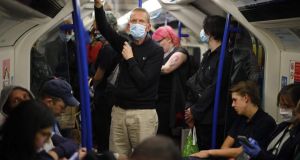 Some passengers wear face masks on a London underground train on Wednesday. Face coverings will be compulsory on public transport in England from June 15th. Photograph: Tolga Akmen/AFP via Getty

Face coverings will become mandatory on public transport in England from June 15th, with passengers not wearing them facing possible fines.

Transport secretary Grant Shapps told a press conference in Downing Street the measure was a necessary precaution as passenger numbers are expected to increase in the coming weeks.

“With more people using transport the evidence suggests wearing face coverings offers some – albeit limited – protection against the spread for the virus,” he said.

“Of course frontline staff, those in contact with passengers, doing such an important job at this crucial time will also need to wear face coverings. In the coming days the government will work with the unions, who’ve been supportive, for which I’m very grateful, transport operators and the police to ensure that they’ve the supplies they need to be safe and to provide reassurance to the public.”

Scotland’s first minister Nicola Sturgeon said her government was considering introducing a similar requirement but had yet to make a final decision. Mr Shapps said passengers travelling without wearing a face covering could be refused travel or fined.

“It is condition of travel. You cannot travel unless you are wearing a face covering. There will also be other powers so it could ultimately lead to fines. I very much hope we won’t be in that situation,” he said.

The announcement came as business secretary Alok Sharma, who fell ill at the despatch box in the House of Commons on Wednesday, said he had tested negative for coronavirus. Mr Sharma’s illness raised fears at Westminster that the government’s decision to require MPs to vote in person from now on risked spreading the virus.

Shadow Commons leader Valerie Vaz said many voters saw images of MPs queuing for up to an hour to vote on Tuesday alongside pictures of a long queue outside Ikea.

“When someone gets to the top of one queue, they get a cushion and perhaps some meatballs; with us, someone might even get infected,” she said.

“That image of our parliament is going to live with this government forever – time wasting, shambolic, breaking the rules, putting people’s lives at risk.”

Commons leader Jacob Rees-Mogg said the queuing system allowed MPs to keep a safe distance from one another as they waited to vote. And he said it was important that, as people around the country returned to work, that MPs should lead by example.

“How can we look teachers in our constituencies in the eye when we are asking them to go back to work and saying that we are not willing to? We have to be back here delivering on the legislative programme, but also being held to account. It is fascinating that the opposition seem so reluctant to hold the government to account, but it is right that we should be held to account, and that is done effectively by being in this chamber,” he said.