Coronavirus ‘in retreat across the land’, says Matt Hancock 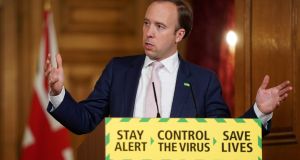 UK health secretary Matt Hancock: suggested there would be a local rather than a national response to any new outbreak of the virus. Photograph: Pippa Fowles/10 Downing Street/AFP via Getty Images

Coronavirus is “in retreat across the land” in Britain, health secretary Matt Hancock asserted on Monday as the number of daily recorded deaths fell to its lowest level since before the lockdown.

A total of 40,597 people have died in Britain of coronavirus, the second highest figure in the world after the United States, and an increase of 55 since Sunday. No deaths were recorded in hospitals in London on Monday and none in Scotland and Northern Ireland.

“When you look across the board, it is clear that coronavirus is in retreat across the country. But we must be vigilant and we must be cautious, and we are taking a safety-first approach. It means that we can proceed with our plan of making some changes, for instance looking towards the proposals that have been made next week on the retail sector, and that people can have confidence to take their children to school in the three years that we’ve opened so far,”Mr Hancock told a press conference in Downing Street.

He said the R number, or infection rate, was below 1 in every part of Britain but suggested there would be a local rather than a national response to any new outbreak of the virus.

“If we see outbreaks in a particular area, then we will take local action. This will mean, for instance, action in particular hospitals or particular care homes to make sure there is control of those outbreaks,” he said.

But Boris Johnson’s official spokesman said that, despite protests from the travel industry, most of those who arrived in Britain on Monday were complying with the new rules.

“All of the indications so far is that there has been a good level of compliance and we do expect the vast majority of people to play their part of helping to stop the spread of this disease,” the spokesman said.

Labour has called for a testing regime at airports, describing quarantine as a blunt instrument and criticising the government’s slow introduction of the new measures. In the House of Commons, shadow security minister Conor McGinn asked home secretary Priti Patel why the government believed its approach was right and all other countries were wrong.

“Scientists say that the quarantine introduced today has come too late. The police say it is unenforceable. The tourism and aviation industry say that it will ruin them, and the home secretary’s department said that it is very hard to imagine how it will practically work. In contrast, our proposal for a 48-hour testing-led model would be targeted and efficient and would keep the country open for business,” he said.

Boris Johnson’s government has the lowest approval rating of any in the world for its handling of the coronavirus crisis, according to a YouGov poll that shows just 41 per cent saying it is handling the crisis well.

1 Prepare for six months of Covid-19 restraints, warn health officials
2 Speed and distance of Covid-19 droplets tracked by Mater researchers
3 Covid-19: Seventy cases in Cork traced to local pubs and restaurants in recent weeks
4 No joy for consumer with a faulty Husqvana chainsaw
5 The Secret Teacher: My students’ capacity to socially distance is worryingly low
Real news has value SUBSCRIBE