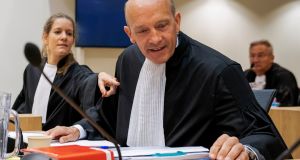 Lawyers for one of the four men charged with the murder of 298 people on board Malaysia Airlines Flight MH17 have indicated that one possible defence may be that the Netherlands does not have jurisdiction in the case – because the defendants may have immunity under the Geneva Convention.

Resuming after an adjournment of more than two months, the trial into the 2014 disaster heard that because MH17 was shot down over a war zone in Ukraine, it was possible that it came within the ambit of the convention under which armed forces are legally designated “combatants”.

Sabine ten Doesschate, counsel for former Russian special forces soldier Oleg Pulatov, the only one of the four to recognise the court, told the five judges that as combatants, soldiers were entitled to engage in hostilities and armed conflict.

This did not apply only to “official” armed forces but was a designation that could sometimes also be granted to militias, perhaps such as the pro-Russian separatists operating in the Donetsk region when the Malaysia Airlines jet was hit, allegedly by a Russian-made Buk missile.

Where armed forces and militias were found to qualify as combatants, they also qualified under international law for “combatant immunity” – immunity from criminal prosecution for killing, assault or destruction of property where it was done within the rules of war.

“This does not mean, of course, that anyone can just shoot down a civilian aircraft”, said Ms ten Doesschate, “but there are issues here about combatant status and combatant immunity that should be decided before opening the evidentiary issues in this case.”

She argued, however, that because of Covid-19 restrictions both in the Netherlands and in Russia, it had been impossible for her or her colleagues even to discuss the desirability of this defence with their client – and plans for a two-week visit to Russia had had to be abandoned.

“It is absolutely impossible to discuss such a large and complex criminal file of 40,000 pages on the telephone via an interpreter,” she said, asking the judges for more time to prepare Mr Pulatov’s defence. The original adjournment on March 23rd was to give the Pulatov team time to review the case file.

Opposing the application, public prosecutor Ward Ferdinandusse said that if Mr Pulatov chose not to have “meaningful contact” with his defence team that was “a matter for him”.

Ms ten Doesschate replied: “The prosecution says Pulatov chose to limit contact. But that was not Pulatov, that was the effect of coronavirus.”

The judges did not give a decision on Monday.

As the case resumed, the defendants – three Russians, Sergey Dubinsky, Oleg Pulatov and Igor Girkin, and Ukrainian Leonid Kharchenko – remain at large and are being tried in absentia. All held senior positions in pro-Russia militias in eastern Ukraine in 2014, prosecutors allege.

The court at Schiphol high-security judicial complex also heard confirmation on Monday that while 13 people had originally been granted “threatened witness” anonymity, one – witness V11 – had since had that decision reversed due to a “procedural” error.