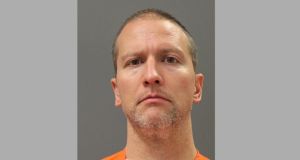 The white police officer charged with murder in the killing two weeks ago of George Floyd, a black man whose death in custody led to nationwide protests, was given a bail of $1.25 million (€1.1 million) on Monday afternoon.

Derek Chauvin, a 19-year veteran, participated in his initial hearing at the heavily fortified Hennepin County courthouse on a video feed from jail. Mr Chauvin, who has been behind bars since he was arrested May 29th, faces charges of second-degree manslaughter and second-degree murder, a more serious count than he had originally faced. He faces up to 40 years in prison.

Mr Chauvin, who placed his knee on the neck of Floyd for nearly nine minutes in a video that prompted anguish and outrage across the nation, has been a focus of anger. Activists said they feared he would not abide by bail restrictions if he is permitted to go home until trial.

The bail set for Mr Chauvin is significantly higher than the bail of at least $750,000 (€663,000) given last week to the other three officers accused of aiding and abetting in Floyd’s death. Lawyers for two of those men, both rookies who had just days on the job, blamed Mr Chauvin, a training officer.

The third former officer has co-operated with authorities. Those are all indications that the police officers will not be presenting a united front, unusual in cases where police are charged in a death.

All four men were fired the day after Floyd died.

The protests started the next day in Minneapolis before spreading to the world. Although some protests have turned into violent clashes with police, and arsons and looting were reported in the early days in some protests, demonstrations were largely calm in recent days.

It is a temporary peace, activists cautioned, if Mr Chauvin is not convicted. “There is a real significant discrepancy between what happens when a policeman does something and a black man does something,” said one protester, Sara Semi, who just got “#icantbreathe” tattooed on her neck. “Chauvin needs to get life in prison if we want to see justice.”

A lawyer for Mr Chauvin declined to comment. In addition, Mr Chauvin’s wife of almost 10 years has filed for divorce. They separated three days after Floyd’s killing. – New York Times