Victory for Corbyn but Labour splits on display in Brighton 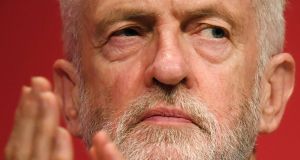 Speakers stressed the importance of remaining united behind party leader Jeremy Corbyn by postponing a decision on the party’s Brexit policy until after a general election. Photograph: Andy Rain/EPA

Jeremy Corbyn’s allies defeated Monday’s attempt to move Labour behind an unequivocal Remain policy by making the decision a vote of confidence in his leadership. Speaker after speaker in the debate stressed the importance of remaining united behind Corbyn by postponing a decision on the party’s Brexit policy until after a general election.

Earlier in the day, Momentum advised its delegates to back the leadership and oppose the Remain motion, despite the group’s deep opposition to Brexit. And most of the unions who control half the votes at conference were also behind Corbyn.

If the motion had passed, Labour would have gone into the next general election promising to negotiate a new Brexit deal with the EU – which it would then campaign against in a referendum. The party could still end up campaigning against its own deal in a referendum where Remain is the other option.

But Corbyn’s victory means it will go into the election promising to give voters a final say on Brexit. This distinguishes Labour from the Conservatives, who have ruled out a second referendum, and the Liberal Democrats, who want to cancel Brexit with an act of parliament.

Labour activists in Remain-voting seats fear they will lose votes to the Liberal Democrats and the chaotic scenes surrounding the vote did nothing for the party’s image. Wendy Nichols, who was chairing the session, said after the show of hands “in my view it was carried”.

But after she was contradicted by general secretary Jennie Formby, a close ally of Corbyn’s, Nichols insisted that it had been lost and could not be put to a card vote in which every vote would have been counted.

“If it was carried, I would have said that,” Nichols said to uproar in the conference hall and bewilderment outside.

The tumult over Brexit overshadowed some radical policy initiatives at the conference, including a universal social care system offering free care in the home to the elderly regardless of income. Labour’s proposal to abolish private schools has provoked outrage in parts of the media but it is unlikely to trouble the 93 per cent of parents who send their children to state schools.

Labour has had a chaotic, rancorous conference so far and the party’s divisions have been on full display in Brighton. But after the supreme court rules on Tuesday morning on Boris Johnson’s suspension of parliament, Labour’s troubles could be forgotten very quickly.

Exemption of vaccinated people from mandatory hotel quarantine being considered

Biden strikes international deal in bid to stop migrants reaching US border 14:49
Johnson and Johnson delays European vaccine rollout as US pauses use over blood clots 12:51
Moscow warns United States to stay away from Russia, Crimea 11:15
How have other countries responded to concerns over the AstraZeneca vaccine? 10:56
Derek Chauvin trial: George Floyd was ‘a person everybody loved’, brother says 08:12

3 Wife and partner of men who died in sewer incident secure settlements of €175,000