Some 40,000 motorists would be driving illegally after no-deal Brexit 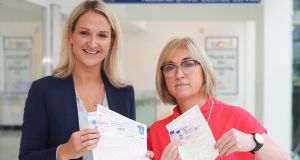 An estimated 40,000 residents with UK driving licences would be driving illegally under a no-deal Brexit on October 31st if they fail to swap their licences in time, the Government has warned.

More than 30,000 of the estimated 70,000 residents in the State still driving on UK licences have exchanged those licences for an Irish licence this year, but the remainder face prosecution if caught driving without a valid licence from the end of next month if the UK crashes out of the EU without an agreement.

Minister of State for European Affairs Helen McEntee warned the remaining 40,000 drivers that in a no-deal Brexit they would be driving illegally as their licences would no longer be recognised under EU law.

“There are still an estimated 40,000 people living in Ireland who by the 31st October in the event of a no-deal will be driving illegally and so we are trying to encourage people to change over,” she said.

These include residents with licences issued in Northern Ireland.

“We want to be very clear: it will not be legal to drive on a UK or Northern Ireland licence if you are a resident in this country after the 31st October,” said Road Safety Authority chief executive Moyagh Murdock.

Speaking alongside the junior minister at an event at a National Driver Licence Service (NDLS) office in Santry, Dublin, Ms Murdock warned drivers they could be brought to court if they are found to be driving without a valid licence and there could be implications for their insurance coverage if they are involved in a collision.

“If you are a tourist or a visitor, yes, you will still be able to drive, but not if you’re resident, living in this country for more than 12 months and you have not made any effort to get your licence exchanged, you can be prosecuted and summonsed to court,” she said.

A spokeswoman for Insurance Ireland, the group representing insurers, advised people to swap their UK licences for Irish licences as they could have difficulty making a claim on their car insurance if they had a British licence post-Brexit.

Drivers who do not apply to exchange their licence in time will have to undergo an eye test and will require a number from the UK licensing authority in order to swap their licence after the UK leaves the EU, which could take some time given the level of demand from people with UK licences in other countries.

Ms Murdock warned the UK licensing agency could be swamped with applications from the estimated 300,000 UK expats in Spain, the 80,000 in the Netherlands and thousands more in other EU states.

The NDLS has been exchanging UK licences at a rate of 250 a day ahead of the scheduled date for Brexit of October 31st, but it is expecting a surge in applications, given that it reached 700 a day in the run-up to the last Brexit deadline on March 29th.

There is a turnaround time of between five and seven days to exchange licences and the NDLS has a target time of 10 days.

The exchange costs €55. Some NDLS offices in the nationwide network will be opening an hour earlier, at 8am, and closing at 6pm, an hour later than normal, to handle an expected surge in applications in the run-up to Brexit.

“The message is getting out but some people are maybe leaving it, through human nature, to the last minute to come forward and we really urge those people: don’t get caught and stuck without a licence,” she said.