Germany, France and Malta to accept people rescued from Mediterranean in new plan 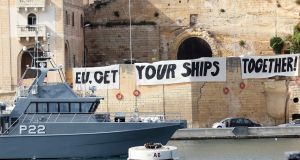 Activists’ banners declare “EU Get your Ships Together!” during a ministerial meeting about migration at Fort St Angelo in Vittoriosa, Malta. Photograph: Domenic Aquilina

Four EU countries have sought to break the deadlock over European migration policy, as Italy’s new government underlined its move away from the hardline policies of former deputy prime minister Matteo Salvini.

Interior ministers from Germany, France, Italy and Malta have agreed a joint proposal to relocate people rescued at sea and end the plight of migrant rescue boats adrift in the Mediterranean while countries bicker over who should help.

The proposals were signed off at a special meeting in the fortified coastal city of Birgu in Malta, shortly after Italy’s new left-leaning coalition government agreed to open one of its ports to a second NGO boat carrying 182 people.

The departure of Mr Salvini and his far-right League party from the Italian government has led to the reopening of the country’s ports to NGO search and rescue boats and helped bring about the latest tentative agreement as France and Germany lead efforts to show that Italy will not be left alone in handling migrant arrivals from north Africa.

However, the politics of migration continue to divide EU member states, even as the number of people making the dangerous central Mediterranean crossing has fallen sharply in recent years.

In a bid to move on from the rancour of recent years, the latest paper proposes “a temporary emergency mechanism”, which means that rescued migrants would be relocated to other EU member states volunteering shelter, after arriving at a Mediterranean port.

“I find it crucial that we move away from ship-by-ship arrangements towards a more predictable solution,” said Maria Ohisalo, the interior minister of Finland, which holds the presidency of the council of the EU and helped broker Monday’s deal.

She said the next step was “bringing together as many member states as possible”. “These arrangements in order to be functional need to be built on shared responsibility involving a sufficiently large number of member states.”

The voluntary plan will be presented to the EU’s 24 other interior ministers at a meeting in Luxembourg in October. It is unclear how many will sign up.

While the European Commission wants all member states to be involved in the scheme, ministers suggested that was unlikely.

Hungary has led a band of central European refuseniks that will not take in any asylum seekers under an existing EU relocation scheme.

The German interior minister, Horst Seehofer, said the number of refugees redistributed through the scheme would depend on how many countries volunteered to take part.

“If we had not now managed to produce a proposal with regard to the sea rescue, Europe’s common asylum policy would no longer have been possible for the foreseeable future,” he said.

“We are all of the same opinion that there must be a distribution of refugees, that we must not leave Italy and Malta here alone, and that the amount of refugees to be admitted will be discussed and decided in Luxembourg on October 8th, because the amount depends on the number of member states taking part.”

The Norwegian-flagged Ocean Viking, operated by the French charities SOS Méditerranée and Médecins Sans Frontières, will disembark in Messina on Tuesday at 7am. The ship has picked up at total of 182 migrants from three rubber dinghies in distress. Passengers include several women, very young children and a newborn baby.

Passengers jumped for joy after hearing they could disembark at Messina, Associated Press reported. “I’m so full of joy! I don’t know what to say now. I’m so happy! No more back to Libya! ” Awudu Baluduzzi (27) from Ghana, told the agency.

On September 15th, 82 other migrants disembarked in Lampedusa, as Italy’s new government intends to draw a line under the crisis.

Giuseppe Conte, on his second mandate as prime minister, has promised to revise the previous government’s anti-immigration policies, which provide for the closure of seaports to rescue vessels carrying migrants, the seizure of NGO boats and fines for ships that bring asylum seekers to Italy without permission.

He has formed a coalition between the centre-left Democratic Party and anti-establishment Five Star Movement. – Guardian