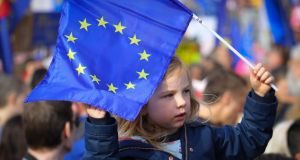 A boy waves the EU flag during a demonstration against Brexit, in London on Saturday as members of parliament sat to debate and vote on Prime Minister Boris Johnson’s final Brexit deal. Photograph: Vickie Flores/EPA

EU member states will wait a few days to see what happens in London before they decide whether to grant the UK another extension or decide how long it should be for. “No one is rushing the fences”, one diplomatic source said on Sunday morning.

Council President Donald Tusk tweeted on Saturday night that he was consulting capitals on how to respond, a process likely to take a few days.

“It will be for the UK government to inform us about the next steps as soon as possible,” the European Commission’s chief spokeswoman said.

When the member states get some clarity on whether the Commons ratification will run beyond October 31st or is set to founder, they may convene another summit before that date. A decision to grant an extension has to be unanimous.

Heads of government like Taoiseach Leo Varadkar and French President Emmanuel Macron have been keen to emphasise that the decision is not automatic, a way perhaps of concentrating minds in the Commons on a binary choice between this deal and no-deal. But few in Brussels expect a request to be denied if and when it comes.

Should the deal be approved by MPs and simply require a few extra days for the parliamentary business of clearing the necessary legislation, it is likely that a summit would be unnecessary and the decision could be taken by written procedure.

Mateusz Morawiecki, the prime minister of Poland, said his country welcomed the Commons vote “not as a rejection of the Withdrawal Agreement but a postponement of its acceptance”.

“Avoiding chaotic, no-deal #Brexit should be our top priority,” he tweeted.

Ambassadors of the EU 27 met on Sunday morning for a brief meeting to formally approve the Brexit deal agreed by leaders at the summit and to send it on to the European Parliament which has to vote on it.

Sources say the meeting which lasted barely 15 minutes had no discussion of extensions although the secretariat announced it had received the three letters from London.

Guy Verhofstadt, the European Parliament’s Brexit coordinator said the Brexit Steering Group of MEPs would meet on Monday. Parliament sources had suggested a vote during this week’s plenary session might have been possible had Saturday’s vote been in favour, but the Commons uncertainty now means MEPs are unlikely to want to approve a deal which may yet be rejected.