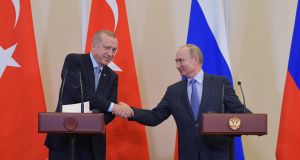 Vladimir Putin and Turkey’s president Recep Tayyip Erdogan reached a broad agreement to establish a buffer zone free of Kurdish forces in north Syria during high-stake talks in the Russian resort of Sochi on Tuesday.

The two men met in the tense hours before a five-day US-brokered ceasefire between Turkish and Kurdish forces expired in north Syria, risking a fresh outbreak of hostilities.

Mr Putin, the Russian president, and Mr Erdogan emerged from more than six hours of talks in Sochi on Tuesday evening to announce the agreement that will see joint patrols with Syrian forces of the Syrian-Turkish borderlands and the removal of Kurdish fighters from the area. There will also be a co-ordinated effort to return Syrian refugees to their homelands.

“We have signed a historic memorandum with Putin for the territorial and political integrity of Syria and the return of refugees,” Mr Erdogan told a joint press conference with the Russian president.

Mr Putin said he had taken “crucial decisions” with Mr Erdogan to help resolve the “acute situation that has developed on the Syrian-Turkish border”. All the rights of the Kurdish people could be factored into the agreement, he added.

Turkey launched a military offensive in northern Syria on October 9th taking advantage of US president Donald Trump’s abrupt decision to withdraw US troops who had been supporting the Kurdish forces that have established control in the area.

Ankara says that Kurdish People’s Protection Units or YPG have links with the Kurdistan Workers Party (PKK) terrorists in Turkey and is determined to drive them out of the Syrian borderlands in the interests of its national security.

Mr Erdogan agreed to a five-day pause in Operation Peace Spring last Friday during talks with US vice-president Mike Pence in Ankara. On Tuesday, as he embarked for the meeting with Mr Putin in Sochi, he warned that Turkish forces would resume the offensive in northern Syria with “greater determination” once the ceasefire expired unless Kurdish forces had withdrawn from the area.

US secretary of state Mike Pompeo also ratcheted up pressure, warning on Monday that Mr Trump was “fully prepared” to take military action against Turkey over the attack on the Kurds in Syria if necessary.

Under the agreement forged by Mr Putin and Mr Erdogan in Sochi, Russian military police will launch a joint operation with Syrian government border guards on Wednesday to remove Kurdish YPG militia and their weapons to a distance of 30km from the Turkish border within 150 hours.

Turkish and Russian forces will then begin joint patrols of a 10km wide zone to the west and east of the Operation Spring zone inside Syria.

The Russian foreign ministry said the accord would bring an end to Turkey’s military offensive against Kurdish forces in north Syria. Both Russia and Turkey would take action to prevent the “infiltration of terrorist groups” into Turkish territory.

The success of the agreement will depend on Mr Erdogan’s willingness to overcome his aversion to the Kremlin’s ally Bashar al-Assad and enter negotiations with the Syrian president.

Mr Putin said Turkey and Syria needed to talk and pledged that Russia would facilitate a dialogue.

Mr Erdogan insisted that Turkey respected Syrian sovereignty and “did not want to acquire someone else’s territory”.

Mr Assad branded the Turkish leader a “thief” in the hours before the Sochi talks and said he would support any “popular resistance” to Turkish assault on north Syria. “Erdogan is trying to steal our land,” he told Syrian government troops during a visit to Idlib province on Tuesday “When we are attacked and robbed we must stand together.”