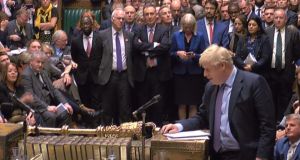 Boris Johnson speaks in the House of Commons after the programme motion setting out the proposed timetable for the Brexit Withdrawal Agreement Bill was voted down on Tuesday night. Photograph: Handout/AFP/Getty

European council president Donald Tusk has said he will recommend the EU accept the UK’s request for a Brexit extension.

Mr Tusk tweeted: “Following PM Boris Johnson’s decision to pause the process of ratification of the Withdrawal Agreement, and in order to avoid a no-deal #Brexit, I will recommend the EU27 accept the UK request for an extension. For this I will propose a written procedure.”

Mr Johnson said his government would “pause” the planned legislation until he spoke to European Union members states and they reached a decision. He insisted Britain would leave the EU with his deal “one way or another”. Preparations for a no-deal outcome would be accelerated.

Mr Johnson had earlier on Tuesday told parliament that if it delayed his Brexit legislation he would abandon his attempt to ratify the deal to leave the EU and push for an election instead.

After he was forced by opponents into asking the EU for a delay that he had vowed he would never seek, Mr Johnson was battling to ram legislation through the House of Commons in an attempt to enact his last-minute Brexit deal.

MPs voted at around 7pm on Tuesday evening for a second reading of the 115-page bill. Mr Johnson won that vote by 329 to 299 votes. It was the first time a Brexit deal had secured a majority in the Commons.

MPs then voted on the government’s tight timetable for approving the legislation. That vote was lost by Mr Johnson as MPs voted 322 to 308 to defeat the programme motion. The DUP’s 10 votes proved decisive.

‘One way or another’

After losing the second vote, Mr Johnson told MPs: “I will speak to EU member states about their intentions.”

“Until they have reached a decision we will pause this legislation.”

However, he added: “Let me be clear. Our policy remains that we should not delay, that we should leave the EU on October 31st and that is what I will say to the EU and I will report back to the House.

Following PM @BorisJohnson’s decision to pause the process of ratification of the Withdrawal Agreement, and in order to avoid a no-deal #Brexit, I will recommend the EU27 accept the UK request for an extension. For this I will propose a written procedure.

“And one way or another we will leave the EU with this deal, to which this House has just given its assent. And I thank members across the House for that hard-won agreement.”

Before that, referring to the first vote, he said: “Can I say in response how welcome it is, even joyful that for the first time in this long saga, this House has actually accepted its responsibilities together. Come together and embraced a deal.

“I congratulate honourable members across the House on the scale of our collective achievement because just a few weeks ago hardly anybody believed that we could reopen the Withdrawal Agreement, let alone abolish the backstop, that is indeed what they were saying.

“And certainly nobody thought we could secure the approval of the House for a new deal and we should not overlook the significance of this moment.”

“It’s welcome that the House of Commons voted by a clear majority in favour of legislation needed to enact Withdrawal Agreement. We will now await further developments from London and Brussels about next steps including timetable for the legislation and the need for an extension,” Mr Varadkar said.

Moments after MPs rejected the prime minister’s timetable for passing the withdrawal agreement, a spokeswoman for the European commission made a pointed reference to the new exit date sought in the extension request sent on Saturday.

“The European commission takes note of tonight’s result and expects the UK government to inform us about the next steps,” the spokeswoman said. “Donald Tusk [president of the European council] is consulting leaders on the UK’s request for an extension until 31 January 2020.”

Mr Johnson said earlier in the day that he would seek a general election if the EU gave a three-month extension to the UK’s membership – an election which he would fight under the slogan of “Get Brexit Done”.

EU sources suggested that Brussels would seek to avoid being dragged into a domestic row by offering a flexible extension that would allow the UK to leave on ratification of the deal.

Mr Tusk had earlier in effect confirmed the EU would grant a Brexit delay beyond October 31st, with the terms of the extension of UK membership depending on developments in Westminster.

He said: “The situation is quite complex following events over the weekend in the UK and the British request for an extension of the article 50 process.

“I’m consulting the leaders on how to react and will decide in the coming days. It’s obvious that the result of these consultations will very much depend on what the British parliament decides or doesn’t decide.

“We should be ready for every scenario but one thing must be clear, as I said to prime minister Johnson on Saturday, a no-deal Brexit will never be our decision.”

After several MEPs backed a further delay during a debate, Mr Tusk reiterated his backing for an extension. “Thank you for your responsible position on Brexit and the extension,” he said. “After what I have heard today in this chamber, I have no doubt that we should treat the British request for an extension in all seriousness.”

An extra hurdle to the UK leaving by October 31st appeared to be put in the way by Guy Verhofstadt, the co-ordinator of the European parliament’s Brexit steering group.

In comments that will antagonise the Democratic Unionist party (DUP), which is opposing the revised deal, Mr Tusk said the agreement struck had been possible due to Mr Johnson’s acceptance of a border being drawn in the Irish Sea between Northern Ireland and the rest of the UK.

“[The deal] is based on the deal that we agreed with the previous government,” Tusk said. “The changes concern the protocol on Ireland and Northern Ireland formerly known as the backstop.