The Irish Times view on the Brexit deal: A fair, hard-won compromise

Boris Johnson’s red lines melted away, enabling him to sign up to ideas he once denounced 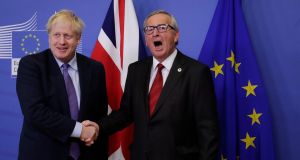 Having been elected leader of the British Conservative Party for his supposed dogmatic intransigence on Brexit, Boris Johnson, it turns out, was willing to show far more flexibility than Theresa May to strike a deal on the UK’s departure from the EU.

Johnson was well aware that his fresh party mandate, and his standing among Brexiteer ultras, gave him more room for manoeuvre than his predecessor. Ultimately, the realities of his own position – along with the capacity for self-contradiction he has exhibited throughout his career – led to his greatest gamble: agreeing a deal to which the Democratic Unionist Party was opposed.

This was classic Johnson: what yesterday was a sacred union between the Tories and the unionists today looks more like a sham marriage – one it was no longer convenient for the Conservatives to prolong.

To be sure, the EU-UK deal is a compromise, and hard-won at that. But, not surprisingly, given the superior negotiating hand of the EU27, the concessions on the European side are less substantial than those made by London.

Yes, the withdrawal agreement was reopened – contrary to what many in Dublin and Brussels had maintained. Yes, the backstop is gone and Northern Ireland will remain in the UK customs area. But it’s clear from the legal text that, in effect (if not formally), the North will remain in the EU customs union.

The price Johnson has paid for killing the backstop is his acceptance, as the default position, of the very thing – Northern Ireland in the EU customs union – that the backstop would, if activated, have produced.

At the DUP conference last year, Johnson said no British prime minister could ever accept a customs and regulatory border in the Irish Sea. He just has. And while earlier British proposals would have given the DUP a veto in any decision of the Northern Assembly to opt out of the new regime, the deal stipulates that such an opt-out would be by majority vote.

The deal is good for the Irish Government, in that it ensures no border infrastructure in Ireland and allays associated security risks. For the EU, the integrity of the single market is maintained and its commitment to Ireland is powerfully underlined. It’s also good for Johnson.

Even if he loses Saturday’s vote in the House of Commons, he can go to the people arguing that he did what he said he would do, only to be stymied by parliament. The DUP overplayed its hand, but it’s in everyone’s interest to avoid any triumphalism at the party’s expense and to work to repair relationships that have been so badly frayed. Ultimately – and it bears repeating – the deal is good for Northern Ireland, which will have a special economic status that will help to ease the damage of Brexit while retaining the open land border that has been so important to its recent stability.