Two British citizens are critically ill after they were exposed to Novichok, the same nerve agent that struck down a former Russian agent and his daughter in March, Britain's top counter-terrorism officer has said. Video: Reuters 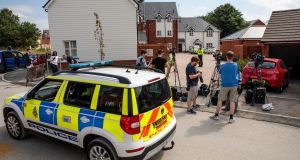 Police and media at the scene at Muggleton Road where the couple exposed to a nerve agent lived. Photo by Jack Taylor/Getty Images

Two people poisoned in southwest England may have accidentally come into contact with the same Novichok nerve agent used in an attack on a former Russian spy.

British home secretary Sajid Javid said on Thursday that the poisoning of Charlie Rowley (45) and Dawn Sturgess (44) may be linked to Russia’s “reckless murder attempt” on the MI6 informant Sergei Skripal and his daughter Yulia in Salisbury in March.

Mr Rowley and Ms Sturgess are in a critical condition in Salisbury hospital after falling ill in Amesbury on Saturday. Police said that they had handled an item contaminated with the Novichok nerve agent.

Whitehall officials said the most plausible explanation for their poisoning was that they found a vial or syringe of the Novichok used on the Skripals.

“Many of you will question whether this incident is linked to that one,” Mr Javid told MPs. “It’s clearly the main line of inquiry.”

The home secretary stressed that people must not jump to conclusions and that the police must be given time to investigate. But he also said the Russian state was responsible for the attack on the Skripals, noting how Britain and some of its allies had responded by expelling diplomats.

Mr Javid said the UK would consult its allies in the wake of the latest poisoning, adding: “It is completely unacceptable for our people to be either deliberate or accidental targets. Or for our streets, our parks or our towns to be dumping grounds for poison.”

He also said he recognised the concerns among “anxious” local residents, and insisted that public safety was of paramount importance for the government.

“There is no significant risk to the wider public,” said Mr Javid, but he urged people not to pick up dangerous objects such as “needles and syringes”. He spoke after chairing a meeting of Cobra, the government’s emergency committee.

About 100 officers from the Metropolitan Police’s counter-terror unit, who continue to investigate the attack on the Skripals, are now also looking into the case of Mr Rowley and Ms Sturgess.

Met assistant commissioner Neil Basu said late on Wednesday that while no contaminated items had yet been found, officers were trying to piece together the pair’s movements to figure out where they might have been poisoned. “We have no idea what may have contained the nerve agent at this time,” he added.

Among the sites cordoned off is Queen Elizabeth Gardens in Salisbury, 12km from the Amesbury address where Mr Rowley and Ms Sturgess fell ill, but a five-minute walk to the Maltings area of the cathedral city where the Skripals were found.

Both Sergei and Yulia Skripal, who were in a critical condition in hospital for weeks after the March attack, have since recovered and are being kept in a secure location, thought to be in London.

The latest developments will raise serious questions about the clean-up operation in Salisbury, which involved chemical weapons specialists from the Ministry of Defence research laboratory at Porton Down and members of the armed forces.

Police insisted, however, that there was no evidence that the latest incident occurred in one of the areas already decontaminated following the attack on the Skripals.

Russia has consistently denied any involvement in the attempted murder of the Skripals. The Kremlin said on Thursday it had no knowledge of a request for information from the British government about Mr Rowley and Ms Sturgess.

“I have not heard about any requests,” said Dmitry Peskov, spokesman for president Vladimir Putin. Moscow had previously proposed that Russia and the UK conduct a joint investigation into the poisoning of the Skripals in March “but found no reciprocity”, he added.

“Of course, we feel terrible for the two citizens who are in critical condition ... We hope they get well,” said Mr Peskov. – Copyright The Financial Times Limited 2018