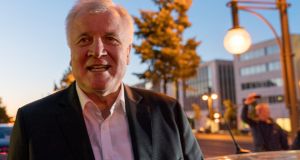 Dr Merkel and her Bavarian allies have agreed to erect closed “transit centres” for asylum seekers at three border crossings on the Bavarian-Austrian border.

On Tuesday afternoon, Austria’s FPÖ interior minister Herbert Kickl lashed out at the proposal to pass asylum seekers unclaimed by other EU countries back over the border to his country.

Austria, he told a press conference, would not be forced to pay the price “for a failed ‘welcome culture’ that is linked in Europe to certain names” – a swipe at the German chancellor.

Late on Monday night she struck the deal with her Bavarian Christian Social Union (CSU) sister party to defuse a row that endangered her government’s survival.

Under the plan, arrivals at three main border crossings from Austria who seek asylum will be directed into so-called transit centres in Bavaria for expedited processing. In the case of a refusal, they will not be allowed into Germany but returned to their EU point of origin – or back over the border into Austria.

“We must not act in an unco-ordinated fashion,” the agreement reads, “but reach administrative agreements with affected countries.”

Politicians in Vienna’s conservative-far right coalition reacted with anger to the proposals on which they were not consulted and have proposed their own checks on the border with Italy.

“A Europe without inner borders needs functioning protection of outer borders,” he said.

Later, in Vienna, he vowed to “implement measures to protect our southern border in particular”.

Italy’s far right-populist government reacted enthusiastically to the German and Austrian plans. Deputy prime minister Matteo Salvini said he was ready to implement controls on the north-south Brenner Pass “in the morning”.

“This would be a good deal for Italy, it can only profit from this,” he said.

The prospect of large-scale border controls – on top of temporary emergency controls, now in their third year in some regions – piles pressure on the Schengen free movement area.

Dr Merkel’s coalition partner have yet to decide if they will carry the plan. Andrea Nahles, centre-left Social Democratic Party (SPD), said she was studying the document which – given its many uncertainties – resembled “an uncovered cheque”.

On Thursday Mr Seehofer, a passionate chess player, will travel to Mr Kurz in Vienna to explain how his national measures will avoid a border domino effect across the continent. After a brief phone conversation, Mr Seehofer said he had the impression the Austrian leader was “interested in a sensible solution”.

‘Axis of the willing’

On a recent visit to Berlin, Mr Kurz held a joint press conference with Germany’s interior minister and flagged resolving Europe’s refugee question with an EU “axis of the willing”. His choice of term – with echoes of the wartime fascist pact – raised more than a few eyebrows in Berlin.

Since taking office last December, the Austrian government has cracked down on inward migration and integration spending, and takes a dim view of accepting any new arrivals from Germany.

Czech prime minister Andrej Babiš welcomed the agreement in Berlin and triggered speculation of introducing national controls on its border with Bavaria.

German asylum applications have dropped drastically – 68,000 so far this year compared to 746,000 in all of 2016 – but the CSU demanded a migration deal in the hope of winning back voters from the far right Alternative für Deutschland (AfD) in next October’s state election in Bavaria.