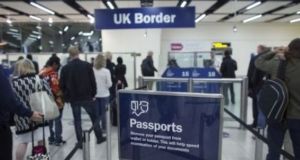 The Common Travel Area is based on a collection of legal provisions rather than on an international treaty or concrete agreement. Photograph: Oli Scarff/Getty Images

During the Spanish Civil War, sympathetic guides took volunteers wishing to fight for the republic over mountain passes from France, which only goats might have been expected to cross.

Decades later, a heavily-militarised German Democratic Republic (the DDR or Communist East Germany) prevented its citizens from leaving by a 1,400 km long wall of concrete, barbed wire and guns stretching from the Baltic Sea to Czechoslovakia.

Even in today’s times of modern surveillance it is difficult fully to control the crossing of borders by those who are sufficiently motivated to attempt to do so, whether they are desperate refugees, smugglers and criminals, or fighters in some cause.

The complex and sometimes bloody history of Ireland’s porous own borderlands has been documented more than once, most recently in writer and mapmaker Garrett Carr’s fascinating book The Rule of the Land.

Carr traversed every kilometre of the contested territory, illustrating how notoriously difficult they are to seal and to police – a reality that was too visible for too long to Border communities.

For two years, the movement of goods has dominated the Brexit negotiations. The movement of people, by contrast, appears on the face of it to be a far simpler matter, but this is not the whole story.

Even if ways and means can be found to regulate the movement of goods, or if it proves possible to do away with the need for such controls, this will not be the case for the movement of people. The implications of this have not been fully considered.

The 1921 Anglo Irish Treaty was silent on matters of migration and settlement, including cross-Border movement. By default, it was assumed that the new Free State would, for all practical purposes, continue to function in the same manner as before.

Irish and British people continued to have reciprocal immigration and settlement rights in one another’s jurisdictions. It also meant that border controls were concerned primarily with goods and not people.

The free movement regime between the two jurisdictions changed during the second World War. Travel from Ireland to Britain, usually for employment purposes, was subject to permission from both sides.

Travel from the Free State to Northern Ireland required an identity document; a residence permit was necessary if a longer stay was intended. Interestingly, Northern Ireland travellers faced control checks if they sought to enter Britain.

In itself, this is an indication of how impracticable it was considered to seek a hard land border within the island, even though Northern Unionists resented being placed on a different footing from people in other parts of the UK.

Such anger was frequently ventilated by Unionist MPs in the House of Commons. The British requirement for a travel permit for those coming from any part of the island of Ireland did not lapse until the end of 1947.

The UK view was that travel controls would only be fully abolished if and when a similar immigration policy was established between the two governments. Such a policy was agreed by the Department of Justice in Dublin and the UK home office in London in 1952.

It formed the basis for what is now known as the Common Travel Area (CTA), a term first used in 1953. Irish officials went to some lengths to conceal the background to the negotiation, telling London the rules would be “entirely informal”.

Consequently, the terms of the 1952 agreement were not made public at the time - a deal that lay at the heart of UK/Irish immigration arrangements for decades was effectively kept secret for decades, at Dublin’s behest.

The CTA is an unusual arrangement, as may be judged by the Ireland Act passed by Westminster. Within this, “the Republic of Ireland is not a foreign country for the purposes of any law in force in any part of the United Kingdom”.

British prime minster Theresa May has insisted it will remain in place after Brexit. So, too, has the Irish Government. Under it, Irish and British citizens have free movement rights, the right to work, settle, claim benefits, even vote.

There was, nevertheless, an obvious downside. The CTA has meant that Dublin remained subservient to London in all key matters regarding immigration policy. Moreover, when the UK changed its policies, Ireland followed suit.

Sometimes, the co-operation jarred; notably Dublin’s willingness to follow the diktats of the home office’s ‘blackbook’. If a person on that list applied for a visa to enter Ireland, a refusal was automatic.

The CTA was premised on the assumption that both countries showed, as it were, an identical face, and applied more or less identical policies, to the outside world and its citizens. Such a stance was unsavoury and unpalatable but arguably sustainable, where one of those countries was one with very limited immigration - the loss of autonomy it implied for Ireland was small.

However, the immigrant population of Ireland today is 17 per cent, albeit mostly from the European Union. The entire question of humanitarian migration - asylum seekers and refugees - is more important today than it was for the Ireland of the 1950s.

What if, for instance, the UK was to lurch further towards a xenophobically anti-immigrant stance, or even to contemplate a radical rejection of the terms of the 1951 Refugee Convention? Would Ireland’s hands be tied as well?

For Ireland, the CTA has guaranteed ready access for generations of Irish emigrants to a nearby labour market with a shared language and a strong demand for Irish workers. From a UK point of view, such labour has been readily available and affordable.

Often, the UK was a safety valve for Ireland’s social problems. It accepted Ireland’s pregnant, unmarried women; those seeking abortions, the poor, or simply those who did not feel at home in an often intolerant State.

The CTA has also constituted a key element in the management of a complex set of close relations and tensions between the two jurisdictions. It withstood even the most difficult and fractious period of the Troubles without substantial modification.

The Belfast Agreement of 1998 spurred the dismantling of day-to-day barriers between the two parts of Ireland and between the two islands, including any requirement for the inspection of documents or other Border controls.

Brexit will give rise to a situation where the freedom of movement enshrined in European Union policy and law will no longer apply in the UK, but the CTA will remain in force.

Now, however, a question will arise as to the viability and adequacy of the CTA in the regulation of travel between the UK and Ireland when one of these remains in the EU and the other leaves.

It now seems likely that post-Brexit Britain will move to restrict and regulate the movement of all third-party nationals into the UK, including those coming from the European Union - with the exception of Irish nationals.

The changes will bring consequences. Regarding the movement of non-EU immigrants, we may expect to see strengthened co-operation between the Irish and British authorities to make the two jurisdictions a common jurisdiction in all but name.

Citizens from other EU member states will have an unimpeded right of movement to Ireland, but no right of onward travel to the UK. The UK is now suggesting that national insurance checks, or other such inspections can prevent illegal immigration from Ireland.

However, the creation of such a back-door seems logically and practically incompatible with the regulation of movements into Britain at ports, airports or by train. In all such cases, the UK has been insistent on the need for tight controls and reinforced borders.

For instance, this is why the UK would not join the Schengen zone in the 1990s. It would be no exaggeration to say that “taking back control of our borders” was a key element in the Brexit platform.

Why should it be different for Ireland/UK movements and what might happen, say, to the putative 10,000 Spanish or Romanian migrants who might legally come to Ireland and proceed to attempt to cross the Border, if there are no border controls in place?

Indeed, would the Irish authorities themselves be comfortable with potential flows in the other direction in an unstable post-Brexit situation? Electronic surveillance will not address these issues.

The initial removal of Border controls in the 1990s was accompanied by a number of “soft control” measures to ensure that people not entitled to take advantage of the new freedoms did not seek to do so.

This led to regular inspections on ferries between Scotland and Northern Ireland, for instance, in order to ascertain whether people who were not Irish or British might have crossed, or intended to cross the Irish border.

It also led to Garda checks on buses and trains. Sometimes, ethnic profiling was used, as one black west Belfast man found out to his cost. Such checks now could see people carrying documents to prove that they had the right to circulate without carrying documents.

More generally, it must give rise to the fear that the British and Irish authorities will in effect operate a shared zone of control between the two islands - one that might affect Ireland’s place in the European Union.

For the UK authorities, the Common Travel Policy survived because Irish and UK immigration policies were strongly aligned. It is equally clear that neither the UK nor Ireland regard the notion of a “hard” land border as practicable or desirable.

But jointly-imposed Anglo-Irish controls are very much on the horizon now after the UK leaves the European Union, involving cross-Border surveillance of asylum seekers, refugees and EU migrants - even if no hard border in the conventional sense returns.

Piaras Mac Éinrí, is a lecturer in geography and European studies in the Department of Geography, University College Cork