Trump calls US intelligence chiefs ‘passive and naive’ on Iran 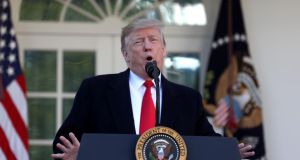 US president Donald Trump has criticised US intelligence chiefs, tweeting: ‘Perhaps Intelligence should go back to school!’ Photograph: Alex Edelman/AFP/Getty

US president Donald Trump on Wednesday called top US intelligence chiefs “extremely passive and naive” on Iran and dismissed their assessments of the threat posed by North Korea a day after they contradicted his views during congressional testimony.

Leaders of the US intelligence community told a Senate committee on Tuesday that the nuclear threat from North Korea remained and that Iran was not taking steps toward making a nuclear bomb, drawing conclusions that contrasted starkly with Mr Trump’s assessments of those countries.

“The Intelligence people seem to be extremely passive and naive when it comes to the dangers of Iran. They are wrong!” Mr Trump said in a Twitter post.

Trump cited Iranian rocket launches and said that Tehran was “coming very close to the edge”.

“Perhaps Intelligence should go back to school!” Mr Trump said.

Trump last year pulled out of an international nuclear deal with Iran put in place under his Democratic predecessor Barack Obama, saying Tehran was “not living up to the spirit” of the agreement, and re-imposed sanctions.

Under the 2015 deal, Iran and world powers lifted international sanctions on Tehran. In return, Iran agreed to restrictions on its nuclear activities, increasing the time it would need to produce an atom bomb if it chose to do so.

The US intelligence officials told the Senate Intelligence Committee that Iran was not developing nuclear weapons in violation of agreement, even though Tehran threatened to reverse some commitments after Mr Trump pulled out of the deal.

Their assessments also broke with other assertions by Mr Trump, including on the threat posed by Russia to US elections, the threat that the Islamic State militant group poses in Syria and North Korea’s commitment to denuclearize.

The Intelligence people seem to be extremely passive and naive when it comes to the dangers of Iran. They are wrong! When I became President Iran was making trouble all over the Middle East, and beyond. Since ending the terrible Iran Nuclear Deal, they are MUCH different, but....

....a source of potential danger and conflict. They are testing Rockets (last week) and more, and are coming very close to the edge. There economy is now crashing, which is the only thing holding them back. Be careful of Iran. Perhaps Intelligence should go back to school!

Lawmakers including the Senate Intelligence Committee’s top Democrat condemned the Republican president’s criticism of the US intelligence leaders.

Mr Trump has clashed with leaders of the US intelligence community since even before he took office, most strikingly in disputing their finding that Russia interfered in the 2016 US election with a campaign of hacking and propaganda to help him win the presidency.

Brennan wrote on Twitter on Wednesday that Trump’s refusal to accept the US intelligence community’s assessments on Iran, North Korea, Islamic State, Russia and other matters shows the extent of what he called the president’s “intellectual bankruptcy”.

Nine days before assuming the presidency, Mr Trump accused the intelligence community of leaking false information, saying “that’s something that Nazi Germany would have done”.

The CIA declined to comment on Mr Trump’s comments. The office of the Director of National Intelligence did not return a request for comment.

Trump has invested heavily in improving relations with North Korea in hopes of getting the reclusive communist nation to abandon its nuclear ambitions.

He broke with decades of US policy when he agreed to meet with North Korean leader Kim Jong Un last June and has planned a second summit in February.

“North Korea relationship is best it has ever been with US No testing, getting remains, hostages returned. Decent chance of Denuclearization,” Trump said in a Twitter post, drawing a comparison to the “horrendous” relationship under Obama.

Director of National Intelligence Dan Coats and CIA Director Gina Haspel told senators that North Korea viewed its nuclear program as vital to its survival and was unlikely to give it up.

Trump also defended his decision to withdraw 2,000 US troops from Syria on grounds that Islamic State no longer poses a threat, saying “we’ve beaten them”.

“Caliphate will soon be destroyed, unthinkable two years ago,” Trump said on Twitter.

Trump has given the US military about four months to withdraw the troops in Syria, backtracking from his abrupt order in December for a pullout within 30 days.

The US. spy chiefs said Islamic State would continue to pursue attacks from Syria and Iraq against regional and Western adversaries, including the United States. – Reuters