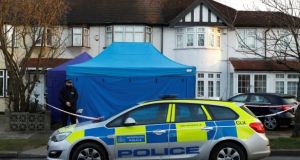 British police have launched a murder investigation into the death of the Russian businessman Nikolai Glushkov after a pathologist concluded he died from compression to the neck, suggesting he may have been strangled by hand or ligature.

The Metropolitan police’s counter-terrorism command is retaining its lead role in the investigation “because of the associations Mr Glushkov is believed to have had” but has cautioned that there was no suggestion of a link with the attempted murders of the Russian former spy Sergei Skripal and his daughter, Yulia, in Salisbury almost two weeks ago.

At the time of his death, Glushkov was about to defend a claim against him by the Russian airline Aeroflot at the commercial court in London, where he was accused of fraud.

In 2017, during a trial in absentia in Russia, he was sentenced to eight years in prison for stealing $123m from the airline, which then pursued the case in London. Glushkov failed to show up at court in central London on Monday and his body was discovered in south-west London that evening.

The Met said: “Detectives are retaining an open mind and are appealing for any information that will assist the investigation.” Officers want to hear from anyone who may have seen or heard anything suspicious at or near his home in Clarence Avenue in New Malden between Sunday, March 11th and Monday, March 12th.

On Friday, British foreign secretary Boris Johnson, blamed the Russian president, Vladimir Putin, for the attack, telling an audience at the Battle of Britain museum in Uxbridge: “We think it overwhelmingly likely that it was his [Putin’s] decision to direct the use of a nerve agent on the streets of the UK, on the streets of Europe, for the first time since the second world war.”

Putin’s spokesman, Dimitry Peskov, denounced the comment as “a shocking and unforgivable breach of diplomatic rules of decent behaviour”. The two nations have already announced tit-for-tat expulsions of diplomats, including 23 embassy staff in London.

At a meeting of European foreign ministers on Monday. Johnson is expected to urge allies to clamp down on Russian espionage and money laundering, but will not table a barrage of new EU-wide economic measures against Russia.