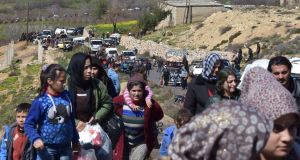 Civilians flee the city of Afrin in northern Syria on March 16th, 2018. A Turkish-led offensive to capture the Kurdish-majority enclave has forced 30,000 civilians from its main city in 24 hours. Photograph: George Ourfalian/AFP/Getty

More reports of the arrest and torture of refugees who return to government-held Syria have emerged, following an Irish Times investigation into reverse migration by refugees leaving Europe.

In December, The Irish Times revealed that a growing number of Syrian refugees are returning home from countries including Germany, Sweden and Denmark, for reasons including family reunification applications being rejected and problems integrating in their host countries.

Since then, The Irish Times has received information that least four returnees have been killed.

One man, who went back to Syria from Germany to care for his sick mother, went missing shortly after returning to his home in Damascus. The last his mother heard of him was when he phoned to say he was near the historic old part of the city – which has remained under government control. Eight months later, the man’s body was found in a street nearby, according to a friend. The family could not confirm who was responsible for the killing.

We also spoke to a Damascus-based lawyer who witnesses death certificates issued for inmates who die in military prisons.

The lawyer – who can’t be named because he fears repercussions – said he has received death certificates for three young men who had recently returned home from Europe, where they were living as refugees.

One returned to Damascus and two to government-held parts of Hama, a region in western Syria.

All three men were arrested less than three months after coming back, and they died in military prison between two and four months after that. The cause of death in each case was listed on official documentation as a “heart problem”.

Rights organisations have previously reported that explanations like “heart attack” and “respiratory issues” are regularly given for Syrian military detainees who die as a result of maltreatment and torture.

The Syrian government did not respond to multiple requests for comment.

Late last year, we visited Damascus and interviewed a man who was arrested at the city’s airport while going through immigration controls after returning from Germany. He was imprisoned for a month and violently interrogated, before being conscripted into the army to fight Islamic State.

We met the man while he was on medical leave, which was granted after his unit was hit by a suicide bomb which killed many of his fellow soldiers.

Other returnees have spoken to The Irish Times about having their passports confiscated so they cannot leave the country again, and being called in for regular questioning by the police, who accuse them of having connections with opposition figures in Europe.

The latest reports come as the Syrian army gradually gains control of the country, prompting discussion among European politicians about when some of the hundreds of thousands of Syrian refugees in Europe can begin to return home.

The Syrian regime is keen to promote President Bashar al-Assad’s leadership as the most stable option for all Syrians, including the more than five million refugees who have fled the country. The government says it is implementing “reconciliation” procedures to allow refugees who supported the revolution to return home.

Refugees who left the country illegally should contact the ministry for reconciliation, Ismail said, and they may need to sign paperwork agreeing not to act against the government again.

However, Syrians who have applied for “reconciliation” said that agreeing to the government’s conditions doesn’t guarantee safety.

One former opposition member, who surrendered to Syrian forces in 2013 because he became tired of in-fighting among rebels and wanted to return to university, has said he fingerprinted documentation stating he would give up any political activity.

He was then allowed home to study for several months before he was arrested for the first time. Over the following years, he was imprisoned twice more – for periods as long as 18 months. He was also brutally tortured, he said.

The man, now a refugee abroad who has asked not to be named because he has family in Syria, said he became emaciated in military prison. He said he was kept in a cell with at least 100 others in a space of just five by five metres. He struggled to describe how horrific the conditions were.

“The most bad thing is when one of your neighbours die,” he said. “One time in the branch, my front neighbour died. I [was] hugging one dead person.” He said the body was left in the cell for at least five hours afterwards.

The man, who lives in Europe, said he was warned by officials during one violent interrogation: “Who told you reconciliation erases your past? We will return you to here every time.”

Much of his account was corroborated by another former prisoner who shared a cell with him.

A report in February by six major international charities said hundreds of thousands of Syrian refugees are now at risk of being forced to return home because of territorial gains by the Syrian government, combined with increased anti-refugee rhetoric in host countries.

“The reality . . . is that despite the shifting military dynamics in Syria and a marginal increase in the number of Syrians who have returned home in the last year, the country continues to be plagued by conflict and insecurity,” the report said.

In 2017, 721,000 Syrians returned to their homes, according to the report. Of those, 655,000 were people who were displaced inside Syria, while about 66,000 were refugees, mostly from neighbouring countries like Lebanon and Jordan. However, for every Syrian that returned home in 2017, at least three more were displaced.