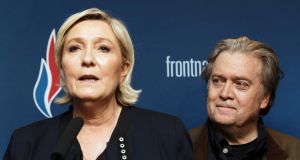 Marine Le Pen is changing the name of her extreme right-wing party from Front National to Rassemblement National or National Rally.

Le Pen explained the move to 1,500 FN militants at the close of the party congress in Lille on Sunday.

“This name, Front National, is the emblem of a glorious, epic history which no one must deny,” she said. “But it is a psychological brake.”

Le Pen has not recovered from her defeat in last year’s presidential election, particularly her poor performance in the televised debate before the runoff. A Kantar Sofres-OnePoint poll published before the congress showed only 28 per cent of French people believe the party is capable of governing, compared to 38 per cent a year ago.

The FN began as a party of protest, became a party of opposition and seeks to become a party of government, Le Pen said. The “psychological brake” had to be lifted so the FN could strike alliances with other right-wing parties. In the two-round French system, it was impossible to win elections otherwise, she said.

Observers believe Le Pen’s young niece, Marion Maréchal-Le Pen, will replace her as the party’s candidate in the 2022 presidential election. Maréchal-Le Pen has made overtures to the conservative Les Républicains, whose leader Laurent Wauquiez shares the FN’s anti-immigrant rhetoric.

The change of name will be submitted to an internal vote, but Le Pen said 52 per cent of members had already agreed in principle. It was “imperative that the word ‘national’ be part of” the name, she said. It was also “important to express our determination to draw together”.

Les Républicains were called the “Rassemblement pour la République” from 1976 until 2002.

Le Pen’s Rassemblement National may bear a new name, but it espouses the same old ideas, chiefly rejection of the EU, immigration and Islam.

Le Pen congratulated the FN’s Italian ally in the EU parliament, Matteo Salvini’s Lega, for its strong performance in the recent Italian election, and predicted anti-EU parties would triumph across the continent in next year’s EU elections.

She drew a parallel between French and Italian politics. “Remember. Four years ago, a frisky young man under the age of 40, Matteo Renzi, took over the reins of power in Italy with a European profession of faith. Sound familiar? One referendum and four years later, our allies in the Lega are at the gates of power. It’s a harbinger. We are watching the fall of the Italian Macron!”

History is on our side. Let them call you racists, xenophobes or nativists. Every day we get stronger and they get weaker

Le Pen criticised the conduct of Brexit negotiations by Frenchman Michel Barnier. “We will break out of this brutal, prison-like model that the EU wants to impose, as shown by the sordid pressures on the unity of Great Britain which the sinister commissioner Barnier is using to try to punish the British people,” she said.

EU “propaganda” claims to represent peace, Le Pen said. “We have proof the EU wants war. In Ireland, by trying to break the equilibrium between the north and south of the island, the EU is trying to reignite a conflict that was extinguished with great difficulty.”

Le Pen used the FN congress to strip her father Jean-Marie, who founded the party in 1972, of his status as honorary president. She also changed its structure, which was modelled on that of the French communist party. The politburo was renamed national bureau, the central committee has become the national council.

Aside from the change of name, the other main event of the FN congress was a half-hour speech by the former White House advisor Steve Bannon on Saturday. The invitation to Bannon backfired on Le Pen when he praised her niece Marion as “one of the most impressive people in the world” while Le Pen listened beside him with a frozen smile.

“History is on our side,” Bannon said, referring to right-wing populist nationalists. “Let them call you racists, xenophobes or nativists. Every day we get stronger and they get weaker.”

The FN said it was suspending Davy Rodriguez, the second-in-charge of its youth movement, after a video posted online showed Rodriguez calling an African employee at La Plage bar in Lille a “dirty black” and a “monkey” on the eve of the congress.