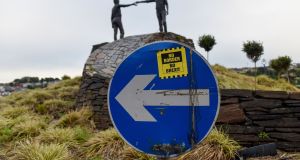 There is “limited room for manoeuvre” for businesses or government to maintain the “status quo” in cross-Border trade between the North and South, which is worth £3.9 billion to the Northern Ireland economy, in the event of a no deal Brexit, a new “sobering” report has warned.

Commissioned by the North’s Department of Economy and authored by two lawyers specialising in EU customs and international trade law, the report examines the impact of new tariffs, potential customs requirements and arrangements that Northern Ireland businesses would need to put in place in order to continue exporting to the South if the UK crashes out of the EU.

According to the Department for the Economy the report is a “sobering reflection” of the limited options available in a no deal Brexit.

The department states: “In particular, it confirms the Northern Ireland Civil Service’s concern about the impact of EU tariffs on food exports to Ireland, and the ability of micro- and small enterprises with no experience in customs procedures and operations to continue to export to Ireland.”

It also warns that “this trade flow is also very important” to small business in the North.

However, the authors of the new report - Eric Pickett, a German lawyer specialising in EU customs law, trade remedies and World Trade Organisation law and Michael Lux, who has been head of unit in the Taxation and Customs Union Directorate-General of the European Commission for 25 years - warn that many businesses in the North, which are SMEs or micro-enterprises, currently have “no experience with customs operations” and that it might be “prohibitive” for these businesses to meet all the necessary requirements to continue exporting into the south after Brexit.

The report, entitled Irish land Border - existing and potential customs facilitations in a no deal scenario, says that: “SMEs only involved in trade between NI and the RoI have not needed customs authorisations, registrations, etc. To prepare for a no-deal Brexit they will need to register as an economic operator, apply for authorisations, in particular for simplified declarations or entry in the declarant’s records, deferred payment, comprehensive guarantees, possibly with a reduced amount, transit facilitations (authorised consignee and/or consignor), inward and/or outward processing, temporary storage and/or customs warehousing facilities.”

According to the authors this might all add up to “prohibitive” costs for some businesses who are also likely to find the “rules and procedures to be extremely complex and confusing” in the event of a no deal Brexit.

Because the prime objective of the report, commissioned by the North’s Department for the Economy was to develop “practical recommendations and identify actionable measures” to keep the border as “frictionless as possible” in a no Brexit scenario, the authors also make a series of recommendations as to how this could be achieved.

Some of their suggestions include establishing new logistics centres “strategically located near the Border”, developing dedicated roads to reduce traffic congestion, establishing joint customs offices and establishing a “single window and one stop shop” that would facilitate customs controls to be carried out at the same time and place and also self assessment options for businesses.

But they do warn that regardless of the potential options for some businesses “just-in time delivery” models will no longer be a possibility and that “documentation requirements” will increase significantly for Northern Ireland businesses who want to export to the South in the event of a no deal Brexit.