Inept slew of Tory politicians have hands on history’s tiller 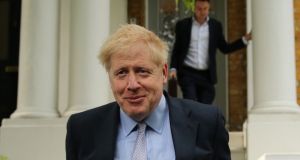 Boris Johnson, the bookies’ favourite to become UK prime minister, leaves his home in London on Tuesday. The great achievement of his handlers has been to get him a haircut and keep him hidden for weeks. Photograph: Isabel Infantes/AFP/Getty Images

The bar is not just low, it is buried. In London, the great achievement of Boris Johnson’s handlers has been to get him a haircut and keep him hidden for weeks. This is the luminary who sees himself as an Attlee or a Churchill, the one whose loose mouth as foreign minister ensured that Nazanin Zaghari-Ratcliffe would continue to rot in an Iranian jail.

The insta-policies of Johnson – the bookies’ favourite to become prime minister – and other willy-waving frontrunners only prove how reactionary and stupid they believe their party colleagues and members to be. Forget the national interest. The cunning plan is to keep the Tory MPs on their padded Westminster benches and the way to do it, they reckon, is to out-Farage Farage, mainly by promising to Brexit hard, on schedule at Halloween.

Choreography is crucial. Win the key to No 10, reopen negotiations, ban all mention of a back stop, bang up a new deal and guide it through parliament before Brexit day, being ultracareful to avoid a catastrophic general election en route. Simples, as the ousted leader doubtless hums several times daily, with a smirk. Meanwhile, to no-one’s surprise, a Financial Times analysis suggests that Brexit uncertainty has caused a 30 per cent drop in investment in the UK, while the EU27 have seen a surge of 43 per cent.

Is this schadenfreude, as letter writers suggest? It’s more like disbelief. This is a time when the rest of us can only feel a deep well of sympathy for ordinary British people. The two nominees for prime minister will be chosen by the most inept, ignorant slew of Tory politicians in modern history.

When the two nominees are decided, the actual choice of prime minister will be made by the Tory party’s 120,000 members, a tiddly 0.25 per cent of the UK electorate

Remember Andrew Bridgen’s notion that “English” people are entitled to an Irish passport? Nadine Dorries’ indignation that Theresa May’s deal would leave the UK without MEPs after Brexit? Dominic Raab’s Fr Dougal-like discovery that he “hadn’t quite understood the full extent” of the UK’s reliance on the Dover-Calais crossing? The same Raab who was accused by the European commission a few weeks ago of maliciously spreading “fake, fraudulent and pure disinformation”? Raab says it merely proves he was “making sure that Britain’s interests were resolutely defended”. So much for British honour. On Monday, his campaign was launched by an MP declaring: “He is a man who respects the EU and is respected by the EU.” Truly they are way down the rabbit hole.

As for Michael Gove, the cocaine snorter who now says sweetly that everyone deserves a second chance, there was this from Sayeeda Warsi, a Tory member of the Houses of Lords: “I’ve lost count of the number of meetings I’ve sat in with Gove where he’s judged, maligned, and sanctimoniously argued that there should be no path to redemption for anyone that may have SAID something that although legal may be objectionable.”

In a parallel universe, Rory Stewart would get the nod. But his cracker of a video eviscerating No Deal has probably killed him off.

But it gets worse. When the two nominees are decided, the actual choice of prime minister will be made by the Tory party’s 120,000 members, a tiddly 0.25 per cent of the UK electorate, often represented on vox pops by some snippy woman from the shires barking, “Just get on with it”. The 0.25 per cent’s demographics are kept deliberately vague but we can take it that the average age is 65-75 , mostly English, and acutely aware that they themselves are a minority of a minority. By the by, nearly a third of them voted for Farage’s Brexit party in the European elections. This is the group that will shape the most radical political pivot for generations, not only for England, but for Ireland, Northern Ireland, Scotland, Wales and Europe.

And yet, a Johnson prime ministry would be an enthralling spectator sport. He has pledged that his brand new “hardball with Brussels” negotiations (yeah whatever) will be led not by officials but by politicians – not the imaginary kind you snort into reality, presumably, and not including the 10 or so grown-ups who have threatened to leave the party if he is elected. He will begin the hardball, of course, by threatening to withhold the €39 billion payment to the EU until there is “greater clarity about the way forward”. He never understood why the “entire” payment was agreed in advance. At which point, Jeremy Corbyn and lieutenants would have to make an actual decision.

I for one would like to see this. Please let there be a fly-on-the-wall documentary team following them all from bed to work for at least six months. Watch out then for the “rogue state” phase, then the Johnson climbdown with Brussels and the cunning way he tries to sell it as a renegotiation. That €39 billion, which was always going to be paid across several decades anyway? That phased payment will be sold as a win.

In a parallel universe, Rory Stewart would get the nod. But his cracker of a video eviscerating No Deal has probably killed him off.