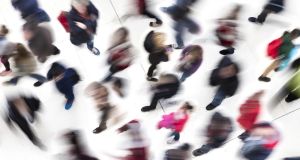 Unemployment in the UK stayed at a 44-year-low of 3.8 per cent. Photograph: iStock

The UK labour market performed better than forecast in the three months to April.

The number of people in work rose a greater-than-forecast 32,000 and basic pay growth unexpectedly accelerated to 3.4 per cent, the Office for National Statistics said on Tuesday. Unemployment stayed at a 44-year-low of 3.8 per cent.

With productivity growth subdued, the figures may fuel concerns that unsustainable cost pressures are building. Bank of England official Michael Saunders warned on Monday that interest rates risk being hiked too late if policy makers wait for Brexit uncertainty to dissipate.

The pick-up in underlying wage growth leaves pay comfortably outpacing inflation, which averaged just 2 per cent in the period. In April alone, wages rose an annual 3.8 per cent, the fastest pace since 2008. The figure was boosted by settlements in the National Health Service. Wage growth including bonuses slowed to 3.1 per cent

The jobs market has so far defied the wider economic slowdown, possibly because firms are choosing people over investment because hiring is easier to reverse if the economy turns sour.

Employment growth was nonetheless down on the 222,000 recorded in the November-January period and the number of vacancies fell by 12,000 in the three months to May. Economic inactivity also increased.

The rise in employment in the latest three months was driven entirely by women, as male employment fell.