Starmer, Thornberry, Lewis, Phillips, Nandy and Long Bailey have said they are running 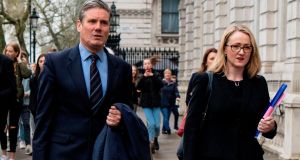 Britain’s Labour Party will on Tuesday begin a three-month, three-stage process to choose a successor to Jeremy Corbyn, with the new leader to be announced on April 4th. All Labour members will be allowed to vote, including those who join within the next two weeks, along with “registered supporters” who pay a £25 fee during a 48-hour period next week.

“We want as many of our members and supporters to take part, so it has been designed to be open, fair and democratic,” a party spokeswoman said after Labour’s National Executive Committee (NEC) announced the procedure on Monday.

To appear on the ballot paper, candidates must pass two hurdles, starting with securing the backing of 22 MPs or MEPs. They must then win the backing either of two trade unions and one other Labour affiliate (such as the Fabian Society or the Jewish Labour Movement) or of 32 constituency Labour parties.

MPs will hold their first hustings on Tuesday evening, completing the first stage in the process next week. Candidates then have a month to win the support of unions and affiliates or of constituency parties and those who succeed will be on the ballot when members start voting on February 21st.

The ballot closes on April 2nd and the new leader will be announced on Saturday, April 4th.

Mr Starmer is currently the favourite, according to a YouGov poll of Labour members, and he launched his campaign with a video portraying himself as a voice of the left in the party. Although he was perceived as one of the most pro-Remain voices in the party and viewed with suspicion by Mr Corbyn’s circle, he said on Sunday that the argument about leaving the EU was over.

“This election blew away the argument for a second referendum, rightly or wrongly, and we have to adjust to that situation. The argument has to move on and the argument now is, can we insist on that close relationship with the EU, close economic relationship, but collaboration in other areas? And also what is the framework now for future trade relations?” he said.

Ms Philips, who has support among the Blairite remnant in the party, on Monday rowed back from a suggestion the previous day that she could lead a campaign for Britain to rejoin the EU. In an article in the Independent, she said Labour must accept that last month’s election had changes the debate on Europe.

“People are asking me if I’ll lead the campaign to rejoin the EU. We haven’t even left yet! The honest answer is that I don’t know what the future will hold, but we must accept the result, move our country forward and hold Boris Johnson to account. I can’t see a campaign to rejoin winning support in the next Labour manifesto,” she said.

“Labour should always be an outward-facing and a pro-European party, but we know in our heads as well as our hearts that our failure to win the election means the terms of the debate have changed.”