UK election: May says Corbyn ‘simply not up to the job’ of PM 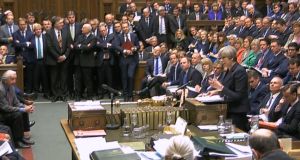 Theresa May during prime minister’s questions in the House of Commons on Wednesday. She repeated again and again that she alone could provide the “strong and stable leadership” Britain needs as it begins negotiations to leave the EU. Photograph: PA Wire

Theresa May used her last prime minister’s questions before June’s general election to accuse Jeremy Corbyn of being weak on national security and “simply not up the job” of prime minister. But she faced her own uncomfortable moment when she refused to commit to maintaining the current formula to protect the value of the state old age pension.

The prime minister took questions for close to an hour, almost twice as long as normal, as fresh polls showed the Conservatives holding a huge lead over Labour. Ms May is more popular with voters than any leader since the late 1970s, according to an Ipsos Mori poll for the Daily Telegraph. Sixty-one per cent say she would make the most capable prime minister, compared to 23 per cent for Mr Corbyn. The poll puts support for the Conservatives at 49 per cent, with Labour on 26 per cent.

Mr Corbyn accused the prime minister of running scared of voters by confining herself to closed campaign appearances among party activists. But Mr Corbyn’s spokesman said on Wednesday that the Labour leader would not take part in a televised debate if Ms May continued to refuse to do so.

During prime minister’s questions, Ms May repeated again and again that she alone could provide the “strong and stable leadership” Britain needs as it begins negotiations to leave the EU.

Foreign secretary Boris Johnson returned to the theme on Wednesday night in his first speech of the campaign. Addressing the Lord Mayor’s Banquet in London, Mr Johnson suggested that Ms May and the Conservatives alone had the qualities necessary to lead the country into a new era as “a European and global Britain”.

“That is where leadership comes in. Clear leadership to navigate this age of uncertainty. We are determined to provide that leadership, to give people the security and certainty they need. Because there can be no more important task for a government that to keep people safe – and we must be prepared to do everything necessary to do so,” he said.

Mr Johnson was speaking as Ms May met European Commission president Jean-Claude Juncker at Downing Street to discuss Brexit and the foreign secretary predicted that Britain’s talks with the EU will be difficult.

“I have no doubt that the negotiations will be tough and some plaster may fall off the ceiling, I am also sure that Theresa May can pull it off, and usher in a new era of free trade deals,” he said.

1 Man unidentified in psychiatric hospital for 30 years may have DNA taken
2 Covid-19: One death and 363 further cases confirmed in State
3 ‘Insane’ gathering of hundreds of students in Galway condemned
4 US election: Everything you need to know about Tuesday’s presidential debate
5 Ireland will not be Brexit ‘collateral damage’, says Coveney in Washington
Real news has value SUBSCRIBE