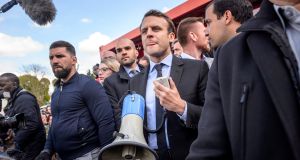 French presidential frontrunner Emmanuel Macron was ambushed on the campaign trail on Wednesday by far-right rival Marine Le Pen, with the rivals for the Élysée Palace clashing over globalisation and compounding a shaky start for Mr Macron in the final two weeks of the election race.

The rivals’ visits to a factory in Amiens in northern France came on what was the first day of vigorous campaigning for both after they led voting in the election’s first round on Sunday. They are fighting to become president in a run-off vote on May 7th, with Mr Macron a strong favourite.

Mr Macron had gone to Amiens, his hometown, where a plant owned by Whirlpool, the white-goods manufacturer, has been at the centre of a heated debate about the challenges of globalisation. Nearly 290 jobs are set to be cut next year when the US group shifts production to Poland.

Staying away from the factory and its angry employees, Mr Macron instead met union representatives in town to talk about how, as president, he would support the business and retrain workers, arguing his government would use the free market for the benefit of all.

Ms Le Pen spotted an opportunity, making an unscheduled if brief visit to the factory gate to hammer home the message to workers that free trade was to blame for France’s de-industrialisation.

A few hours later, Mr Macron turned up at the factory gate. His staff said it was at the unions’ request, not because of Ms Le Pen’s visit. But the impression of being upstaged by a rival more in tune with an angry public has added to Mr Macron’s wobbly start to the final 10 days of campaigning.

He was roundly criticised for celebrating his success in the first round of the election at La Rotonde, a chic Paris restaurant, with friends and celebrities. The FN said it showed he was part of the “oligarchy”.

The former Rothschild banker was given a rough ride by Whirlpool workers who chanted “Macron get out” and “Marine president” as black smoke wafted from burning tyres. Earlier in the day, Ms Le Pen had been taking selfies with beaming employees under a blue sky.

Nonetheless, Mr Macron spent 45 minutes talking to crowd, insisting that shutting down borders, as Ms Le Pen had promised, would do more harm than good. “I am not going to make any false promises. I will not engage in demagoguery.”

Tensions abated slightly after the centrist politician vowed to force Whirlpool’s management to agree to better severance conditions and said he would fight to find a buyer for the appliances factory.

Earlier in the day, Jacques Attali, an economist and confidant of Mr Macron, added to the controversy over the Whirlpool plant, saying the potential loss of jobs was just an “anecdote” and should be seen in the “larger context of job creation”.

“He belongs to another world. He should stay there,” said Benjamin Griveaux, the candidate’s spokesman.

A survey by Harris Interactive released on Wednesday showed that 61 per cent of French voters thought Ms Le Pen had started the final stretch of campaigning well while 52 per cent thought Mr Macron had fared poorly.

Mr Macron’s lead in the polls remains commanding: the latest polls by Ifop suggest that he will take 61 per cent of the votes in the second round, compared with 39 per cent for Ms Le Pen.

Endorsements for Mr Macron continued to come from across the political mainstream on Wednesday. Nicolas Sarkozy, the former president, said he would vote for Mr Macron in a bid to keep Ms Le Pen from power.

President François Hollande, as well as nearly all of the defeated candidates, have already urged their supporters to vote for Mr Macron. The notable exception is far-left former candidate Jean-Luc Mélenchon, who has yet to make a choice, though on Wednesday his spokesman Alexis Corbière told journalists “Not a single vote should go to the FN,”.