Former president, who warned of growing inequality in US, to earn fee at healthcare conference 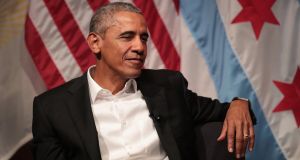 Former President Barack Obama has reportedly agreed to accept $400,000 (€370,000) to speak at a healthcare conference this year sponsored by Cantor Fitzgerald, a Wall Street investment bank.

The lucrative speaking engagement was reported by Fox Business. A spokesman for Mr Obama declined to comment on the report.

Out of office for about three months, Mr Obama has begun the process of cashing in. In February, he and his wife, Michelle, each signed book deals worth tens of millions of dollars. And Mr Obama’s spokesman confirmed last week that he is beginning the paid-speech circuit.

A $400,000 speaking fee for addressing the Cantor Fitzgerald conference would be a sharp increase from the amounts typically paid to his predecessors. Former president Bill Clinton averaged about $200,000 per speech while former president George W Bush is reportedly paid $100,000 to $175,000 for each appearance.

As president, Mr Obama frequently criticised big banks and warned against what he said was a growing inequality in the country that was undermining civic life and the economic fortunes of the middle class. He also pushed for the Dodd-Frank law that regulated Wall Street.

“I believe this is the defining challenge of our time: making sure our economy works for every working American,” Mr Obama said in a speech in December 2013. But Obama also courted Wall Street donors and other wealthy supporters during his eight years in the White House. And since leaving office, he has spent most of his time in lavish locations, vacationing with Hollywood celebrities and wealthy friends. The Cantor Fitzgerald speech would be part of what his aides have described as a series of public and private events that Mr Obama began on Monday in Chicago, where he held a discussion with half a dozen young people about the issue of civic engagement.

Mr Obama is scheduled to deliver a speech in Boston on May 7th at the John F Kennedy Library and Foundation. In May, he plans to hold similar, public conversation with Angela Merkel, the chancellor of Germany. Aides said private, paid speeches are also planned in Europe next month.