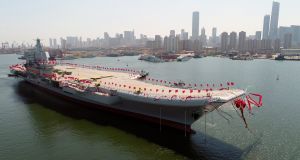 China’s second aircraft carrier, the Type 001A, during a launch ceremony at a shipyard in Dalian, Liaoning province. Photograph: Li Gang/EPA

China has launched its first domestically built aircraft carrier, known for the time being as Type 001A, against a background of simmering tensions over North Korea and regional anxiety about Beijing’s territorial claims in the South China Sea.

The People’s Liberation Army Navy’s new carrier is modelled closely on China’s sole operational aircraft carrier, the Liaoning, which is a Soviet-era vessel bought from Ukraine, refitted and put into commission in 2012.

There is speculation the carrier will be called Shandong, after the northeastern province.

The launch is a milestone in president Xi Jinping’s plans to streamline and upgrade the world’s largest military.

It is the second in what is expected to be a fleet of six aircraft carriers, central to China’s plans to build a “blue water” navy that can back the country’s maritime ambitions in the region and protect its global interests.

It also has significant political value for Mr Xi, who later this year will seek to further entrench his position as president, Communist Party chairman and head of the military at the party’s twice-a-decade congress, at which he is expected to fill the ruling standing committee with his political allies.

China’s navy has attracted a lot of attention because of the country’s claims to nearly all of the South China Sea, which has brought it into conflict with its neighbours, including Malaysia, the Philippines and Vietnam.

The launch of the new conventionally powered aircraft carrier, which has a displacement of 50,000 tons, comes as the US is deploying the nuclear-powered USS Carl Vinson to the region in reaction to tensions on the Korean Peninsula over North Korea’s nuclear programme.

Both the new vessel and the Liaoning are significantly smaller than the Carl Vinson, and are fitted with angled flight decks and “ski jumps” for short take-off but arrested recovery, or Stobar, operations.

Analysts said they would mostly have a training function initially, but they remain powerful strategic assets.

The new carrier was transferred from a dry dock into water at a launch ceremony that started at about 9am local time in Dalian shipyard of the state-owned shipbuilders, China Shipbuilding Industry Corporation, the Xinhua news agency reported.

The ceremony included a performance of the national anthem, official ribbon cutting and the traditional breaking of a champagne bottle on the bow, as well as the blowing of steam whistles from ships nearby, Xinhua said.

The ceremony was attended by Fan Changlong, vice-chairman of the Central Military Commission, as well as Chinese navy leaders and cadres from the state shipbuilding company.

According to the specialist publication Defence News, the biggest difference from the Liaoning would be the reconfiguration of the phased array radar panels, with those on the new ship facing diagonally outward on both sides of bridge fore and aft.

Local media has previously reported that the vessel will have capacity for between 28 and 36 aircraft, expected to comprise Shenyang J-15 jet fighters and helicopters, similar to that on the Liaoning.