Berliners finally dump the car for love affair with the bicycle 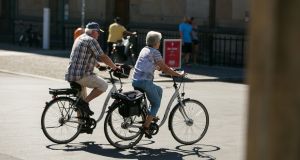 Over the years, Berlin has seen many horrors: hyperinflation, Hitler, David Hasselhoff dancing on the Berlin Wall in an illuminated jacket.

But nothing compares to the horror scenario painted by Florian Graf of the city’s opposition Christian Democratic Union (CDU). In Berlin’s state parliament earlier this month, he warned: “When the supermarkets remain empty because the deliveries can’t get into the city centre . . . that’s when your traffic concept will come down around your ears.”

His passionate protest, prompting gasps of amusement from others, came during a heated debate over Germany’s first “Cycle Law”. With it, the German capital has upgraded the humble bicycle and buried a lingering piece of cold war ideology: the Autogerechte Stadt, or car-friendly city.

After losing the kaiser in 1918, then the führer in 1945, Berlin spent most of its post-war existence ruled by a new king: the car. Four wheels were good, two wheels were bad and feet were worse. The auto industry’s “car = freedom” notion found a particularly receptive audience among residents of walled-in West Berlin.

But that was then and this is now. After years of post-unification stagnation, the capital is gaining 40,000 new residents a year – the equivalent of adding Co Longford every 12 months – and the city streets are seizing up.

But instead of adding new car capacity, Berlin’s “Cycle Law” will see €50 million spent annually to improve the city’s ragged cycle-lane infrastructure. Proposals include upgrading key routes to two-metre-wide lanes, separate from cars and pedestrians; new road markings and traffic light sequences to prioritise cyclists; 100,000 new bike parking spaces; and 100km of “Bike Autobahn” to allow cyclists from the outer districts get into the city while avoiding other traffic and intersections. As part of this rethink, car lanes and car parking spaces will have to go.

Berlin politicians’ Saul-to-Paul cycling conversion didn’t happen voluntarily, but only after the city’s bike lobby presented a 100,000-signature petition last year to force a referendum on mobility policy. They pointed out that cyclists account for 15 per cent of traffic in Berlin yet have just three per cent of the street space, compared with 60 per cent for cars. The noticeable rise in traffic saw cyclist fatalities jump 40 per cent last year to 17.

Spooked politicians in Berlin’s new centre-left government of Social Democrats (SPD), Greens and Left Party agreed to incorporate many of the lobby’s demands into their programme for government.

By investing €200 million over the next four years to make cycling less dangerous and more attractive, Berlin hopes that about 30 per cent of Berliners will get on their bike to get around.

Berlin’s change of heart has infuriated opposition CDU and Free Democrat (FDP) politicians, who have called the new policy an “ideological anti-car crusade”, one that dismisses the reality of millions of Berliners who live outside the city centre’s dense transport network. The government hits back that their campaign is not anti-car but pro-mobility, mirroring successful transport rethinks in cities such as Copenhagen and Amsterdam.

This is where Berlin’s cycling debate parts company with a similar discussion in Dublin. The German capital has integrated public transport with under- and overground trains, trams, buses and ferries – as well as broad, flat boulevards. Dublin has a medieval inner city, urban sprawl, and non-integrated transport and ticketing – not forgetting those magical buses that vanish from the electronic display shortly before they are due to arrive.

Perhaps the final, crucial tipping point for Berlin’s “Cycle Law” is the city’s new army of young people for whom a car is now less important than their smartphone, which they can use to find and rent a car when they need one

Berlin funds real transport alternatives to the car, allowing drivers to accept that driving into the city centre is a privilege, not a right. Dublin drivers have few alternatives because the city operates under the apocryphal Thatcher quote that public transport users over 26 are failures.

Already Berlin’s transport transformation appears to have tapped into a wider shift in public opinion.

A new federal environment ministry survey shows that Germans still love their cars, with 70 per cent of respondents driving at least once a week. But two-thirds of motorists said they would walk or cycle more if cities became more attractive for both.

“People are ready to do without the car, but they need good alternatives,” said Barbara Hendricks, federal environment minister. “Fewer cars, better public transport, good and secure cycle lanes – people want this because it improves their lives and protects the environment.”

Perhaps the final, crucial tipping point for Berlin’s “Cycle Law” is the city’s new army of young people for whom a car is now less important than their smartphone, which they can use to find and rent a car when they need one.

Almost 30 years after dancing around with David Hasselhoff in a blinking jacket to his surprise hit Looking for Freedom, Berliners have now embraced a new freedom: freedom of movement, for the bike and away from the car.