‘This campaign stinks’: France goes to the polls 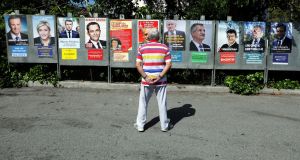 Extreme is probably the word that best describes the French presidential election campaign. Each of four leading candidates is extreme in his or her way. Jean-Luc Mélenchon is on the extreme left; Marine Le Pen on the extreme right. Francois Fillon has been shown to be extremely dishonest; Emmanuel Macron extremely ambiguous. Their colourful personalities have transformed the campaign into a sort of 24/7 reality show.

The two who win the highest scores tomorrow night will face each other in the May 7th runoff, when one will be elected president of France. In the past, the identity of the finalists was usually clear a month before the election. There has never been such uncertainty, with each of the four supported by approximately one fifth of the electorate, and seven “little” candidates dividing up the remaining 20 per cent.

“This campaign stinks,” the outgoing President Francois Hollande was reported by Le Monde to have said in private. Hollande, like millions of French people, particularly fears a runoff between Marine Le Pen for the extreme right and Jean-Luc Mélenchon for the extreme left.

No president of recent decades has left France in better condition than when he took office. Voters were so eager to throw the rascals out that they disqualified Hollande and most of the establishment through opinion polls or in primaries last year. Mélenchon adopted the term dégagisme or “get lost-ism” to describe the virtual decapitation of the political class.

The process has left voters confused, disoriented and exasperated. Though the campaign has raised unprecedented interest – nearly 11 million people, half the country’s television audience, watched the first televised debate – pollsters predict that close to a third will abstain, a record in a presidential election. More than a quarter remained undecided in the closing days.

At home and abroad, attention has focused largely on Le Pen and the possibility that an extreme right-wing nationalist populist government could wreak havoc in Europe. “She can’t win,” the great and the good chant like a mantra. But the Brexit vote and Donald Trump’s victory have dented their certainty.

In the last week of the campaign, Le Pen reverted to the core doctrine of the Front National (FN), the party founded by her father Jean-Marie in 1972, warning that France is being “submerged” by immigrants. Though she expelled Jean-Marie in 2015, he endorsed Marine this week, calling Mélenchon a communist, Macron an opportunist and Fillon a repeat-offender.

Seasoned politician that she is, Le Pen has led a poor campaign. At the second televised debate, she looked red-faced and bloated. She has been sarcastic with journalists and cancelled an interview with the leading morning radio presenter when her remarks questioning the responsibility of France for the deportation of Jews during the second World War raised an uproar.

There is an ugly, anti-media undercurrent at rallies for the FN and Les Républicains (LR), Fillon’s party. Television crews deemed hostile have been harassed and physically thrown out by toughs working for both candidates.

The arrest in Marseille on Wednesday of two young Frenchmen on suspicion they were planning a jihadist attack against a campaign target was a reminder that this is the first time a presidential election is being held under a state of emergency.

Terrorism figured surprisingly little in campaign debates, but at a rally on Easter Monday, Le Pen claimed that had she been in power in 2012, the Franco-Algerian Mohamed Merah could not have gone on the rampage, killing seven people. “With me, there wouldn’t have been the migrant terrorists of the Bataclan and the Stade de France (who killed 130 people in November 2015),” Le Pen said. Le Monde called Le Pen’s attempt to capitalise on France’s tragedies obscene.

Before the arrests, police had warned Le Pen, Fillon and Macron that they were in danger. One of the suspects had posted a photograph of Fillon and a Kalashnikov on the internet, but Fillon refused to wear a bullet-proof vest to his rally in Nice. The interior ministry announced it is deploying 50,000 police and gendarmes for each round of the election.

Fear of attacks would, in theory, strengthen Le Pen and Fillon, who have used the toughest language against immigrants and Muslims. Le Figaro newspaper, which supports Fillon, claimed he was the candidate most hated by Islamic State. Fillon published a book titled Conquering Islamic Totalitarianism last September.

Fillon could still be elected, despite the fact that his wife and children raked in more than a million euro from allegedly fake jobs, and despite the fact that he received €50,000 in bespoke suits from benefactors. With his calm, deep voice and elegant allure, Fillon “looks presidential”. Though Macron has broken ties with Hollande and the socialist party, conservatives believe he represents the continuation of Hollande’s policies. They are determined not to miss what they regard as their turn to take power.

At the height of the Fillon scandals in February and early March, Fillon’s fellow Gaullists tried to replace him. He fought back with a mass demonstration on the Place du Trocadéro, organised by Sens commun (common sense), a Catholic group that was founded to protest against same-sex marriage. Fillon said this week that if he is elected, he will bring Sens commun into his government.

Some analysts believe the second round will pit Le Pen against Fillon. “Fillon is coming up quietly on the inside, like in the primary,” says a European diplomat. “And his vote is more solid than Macron’s. In spite of the financial scandals, the right will always vote for their financial interests and their own.”

Others believe that fear of extremes will result in a run-off between Fillon and Macron. Fillon would emphasise his experience of 36 years in public office, compared to Macron’s near total lack of experience. Voters might prefer the devil they know, despite Fillon’s proven dishonesty and austerity policies.

As the subtitle of journalist Anne Fulda’s book says, Macron is seemingly “such a perfect young man”. The country has been fascinated by his romance with his former drama teacher Brigitte Trogneux, 24 years Macron’s senior. They met when he was 16 and she was married with three children. At age 39, Macron has seven step grand-children

If Macron survives the first round, all polls indicate he would defeat any challenger in the runoff. That would make him France’s youngest president ever, and only the second, after Georges Pompidou, never to have been elected previously to public office.

After a long and bruising campaign, France’s choice will become clearer tomorrow night. At this writing, it is impossible to say whether that choice will involve extreme left and extreme right, hard-core economic liberalism, liberalism tempered with a social conscience, engagement with Europe and a globalised world, or turning inward.