After freedom, defiance and dreams of peace in east Mosul 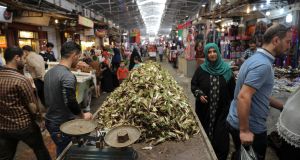 People walk through a market in eastern Mosul on April 19th. The eastern part of the Iraqi city was liberated from Islamic State control in January. Photograph: Marko Djurica/Reuters

The pounding of artillery pierces the return to life in east Mosul, months after the Islamic State terror group was expelled from one half of Iraq’s third largest city.

Across the river Tigris, on Mosul’s west side, hundreds of thousands of civilians are still trapped amid brutal fighting. A US-led international coalition has been bombarding the city for six months while Iraqi ground forces wrestle control of the city’s neighbourhoods from the jihadist group street by street.

Islamic State, also known as Isis, seized Mosul in the summer of 2014, creating a platform to wreak havoc on Iraq and the rest of the Middle East.

After an operation to retake the city began last October, Iraqi forces declared the eastern half of Mosul liberated in January, allowing normal life to return – insofar as possible in a city ruined by months of war.

The sprawling campus of Mosul university, an academic beacon in the Middle East when it was developed in the 1970s and 1980s, is largely rubble

Many young men and boys walk around east Mosul in the colours of their favourite soccer teams – strictly forbidden under Islamic State – and almost every woman seen in east Mosul now openly shows her face. Only one small group of women I encounter are completely veiled.

Popular cartoon characters such as Spongebob Squarepants have reappeared on children’s schoolbags and clothes. T-shirts, tops and jogging bottoms with western logos are on sale in the markets again.

Ali, a street trader in Nabi Younos market, in the centre of east Mosul, described the items he would have been lashed for selling while the city lived under Islamic State rule.

Women’s items such as perfume, cosmetics and clothes had to be sold only by women in the company of their husbands or brothers. Now, Ali can sell these items again along with men’s razors, watches and combs.

He said enforcers from the group’s morality police gave no second chances for offences against their rules.

Another trader said the sale of tight jeans was booming in east Mosul, although tight jeans here would be considered loose on the streets of Dublin.

Shortly after the liberation of east Mosul, Nabi Younos market was struck by mortars launched indiscriminately from areas under Islamic State control. Two people were killed by the attack, a short distance from Ali’s stand.

Iraqi bomb disposal squads continue to remove fresh bombs and booby traps from the liberated eastern side. Islamic State “sleeper cells” or suspected fighters who stayed behind hiding among civilians are being rounded up and arrested almost daily.

The pounding sound of the ongoing battle across the river punctuates the atmosphere. The Iraqi army has had to maintain a kilometre-wide buffer zone east of the Tigris because shells continue to rain down indiscriminately on civilians from western areas still under Islamic State control.

The sprawling campus of Mosul university, an academic beacon in the Middle East for sciences, the arts and technology when it was developed in the 1970s and 1980s, is largely rubble.

Islamic State fighters looted the university, set its library on fire and used a dormitory to make chemical weapons.

Mustafa al-Baghar, from the local government’s rebuilding project, said 14 of the university’s 124 buildings had been levelled, burned-out or destroyed. A further 40 had been extensively damaged and weakened to the point that they may have to be knocked down. Air strikes were partly responsible for the damage, he said.

“I [used to] take photos around Mosul but I [had to] do it in secret because if Isis catch me, they kill me”.

Referring to Islamic State also as Daesh – an Arabic acronym that means a bigot who imposes his view on others – Younis said the terror group destroyed the people’s dreams.

“The people in Mosul have a soft heart [and] need to live in peace and love, according to the Islamic religion,” Younis said.

“After freedom, the people have one dream: to fix what Daesh destroyed and to fix the relationship between Muslims and Christians,” and between “Sunni [Muslims] and Shia [Muslims].

Gen Najim al-Jabouri, who oversees the operation to liberate Mosul and the rest of Nineveh province in northern Iraq, told The Irish Times that normal life had already returned to the east side of the city.

Jabouri said water had returned to the majority of east Mosul’s neighbourhoods on April 18th. The neighbourhoods had not been badly damaged and the people were “comfortable” there. Furthermore, many people from the west side of Mosul, where fighting was ongoing, had temporarily gone to live with friends and family in the east, he said.

Jabouri, who worked with US president Donald Trump’s national security adviser, HR McMaster, against al-Qaeda when he was mayor of Tel Afar city, west of Mosul, during the bloodiest years of Iraq’s sectarian civil war, said he understood the importance of rebuilding trust between Iraqi security forces and the people of Mosul.

The Iraqi military knew “very well”, he said, that the bad relationship between the people and the security forces in the years prior to the fall of Mosul in 2014 “made the people give safe haven” to the militants.

Now, two months after liberating the city, “the relationship [between the people and Iraqi security forces] is very good. I think healthy now,” he said, adding: “We work very hard to build bridges between us and the people and I think until now we succeed in this mission.”

Jabouri said he and the commanders of the various Iraqi military units had organised “patrols to keep the people safe”.

“Every day is better.”