Result in Uruguayan presidential election expected by end of week 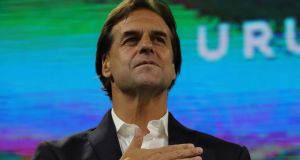 After a nail-biting count that was too close to call, Uruguayans will have to wait until the end of the week for the winner of Sunday’s presidential election to be confirmed.

With all the votes in the run-off round tallied, conservative challenger Luis Lacalle Pou is in poll position to end 15 years of left-wing rule after beating the governing Broad Front alliance candidate Daniel Martínez 48.7 per cent to 47.5 per cent.

But with less than 29,000 votes separating the two on a turnout approaching 90 per cent, the country’s electoral authorities said it will on Tuesday start counting 35,229 votes cast by election observers that have not yet been included before declaring the winner by “Thursday or Friday”.

The decision followed a night of high political drama after it became clear that Mr Martínez had far exceeded expectations and done significantly better than his performance in opinion polls since last month’s first round of voting. In a speech to supporters in which he declined to concede the race despite finishing 1.2 per cent behind, he said: “They tried to bury us but they didn’t realise we are seeds.”

In contrast, Mr Lacalle Pou told a crowd of his supporters he believed the result to be “irreversible” and lamented the fact his rival had not acknowledged defeat. “Formally we will know in a few days,” he said.

Despite the closeness of the result and the rising tension as the count reached its conclusion there was none of the violence or institutional bickering that have recently marked recent elections in a number of South American states.

After voting, outgoing president Tabaré Vázquez told reporters: “In a moment when Latin America is so convulsed we are going through an election campaign and an eventual change of government with so much peace and tolerance.”

An alliance of multiple left-wing parties in power since 2005, the Broad Front is widely viewed as one of the most successful left-wing governments, which dominated South America’s political map since the millennium.

But in recent years it has faced growing criticism for a steep rise in crime and its failure to tackle structural failings in the public education system.

In seeking to explain the unexpected closeness of the vote, commentators have focused on a video released by the former head of the Uruguayan armed forces that circulated widely on WhatsApp in the final days before Sunday.

In it, Guido Manini Ríos called on military personnel not to vote for the Broad Front. He was dismissed from his post in March by Mr Vázquez after he criticised the country’s justice system over efforts to investigate human rights abuses during the last military dictatorship.

He immediately set up a new hard right political party and came fourth in the first round of the presidential election before backing Mr Lacalle Pou in the second round.

Once the content of his video became known Mr Manini Ríos drew criticism from across the political spectrum.