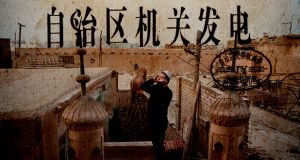 A road construction worker from Xinjiang who urged his colleagues to pray before meals and not to watch pornography was sent to jail for 10 years. Details of the case are contained in the leaked China Cables.

The sentencing document for the 50-year old Uighur Muslim, who left education at the end of primary school, is not a classified document but it is rare for such material to come into the public domain.

The document is among a small cache of documents – the China Cables – leaked to the International Consortium of Investigative Journalists (ICIJ), and shared by it with 17 media partners, including The Irish Times.

The man (whose name is being withheld lest he get into further trouble) was accused of incitement to ethnic hatred. The charges said he had “assembled a crowd to disturb the social order”, while staying in a workers’ quarters.

The man was brought before a country People’s Court in 2018 and the accusations were outlined to the court’s three judges. They were told that in December 2016, while working with the 36th county corps on a national highway, the accused “incited extremist religious thoughts in his colleagues”.

The accused acknowledged his guilt, according to the document. He explained that it was the result “of his low legal awareness and low level of education”. He asked the court to be lenient, and “give him a chance to become a good man”.

The man’s lawyer said that neither he nor his client have any argument against the accusation.

Due to his client’s low educational level, he was “easily susceptible to being misguided and committing crimes. He’s guilty.”

The accused was a member of the Chinese Communist Party and had no previous convictions. Witnesses – apparently his co-workers – gave testimony to the court about what the accused had said, according to the document.

The judges – Erkin Hocimir, Patigul Rozi and Nuruzgul Barat – decided on a sentence of 10 years, with the year already spent in custody awaiting trial to be taken into account.

The imprisonment of members of ethnic minorities in Xinjiang is separate to the incarceration of people from the same ethnic groups in a vast network of “education” camps.

While harsh treatment is believed to be common in both, harsher forms of torture are administered in the prisons, according to Adrian Zenz, a world authority on what is happening in Xinjiang.

According to the Chinese Human Rights Defenders Group, the number of ethnic minority people being prosecuted in Xinjiang shows the Chinese Government has abandoned due process as part of its “Strike Hard” campaign.

Government data showed criminal arrests in Xinjiang accounted for 21 per cent of all arrests in China, even though the region only accounts for 1.5 per cent of China’s total population, according to the group. Uighurs account for approximately half of Xinjiang’s population.

The “Strike Hard” campaign is described by the Beijing government as being targeted at violent extremism, but critics say it is an effort at wiping out an entire culture. Chinese Communist leader Xi Jinping instructed party colleagues in 2014 that the campaign should show “absolutely no mercy”.