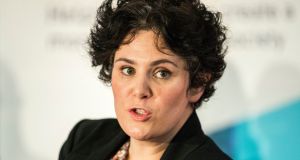 One of the talking points of the past two years of Brexit debate has been the absence of a nationalist voice in the House of Commons to express the Remain view from Northern Ireland. It’s worth remembering that the North voted by 56 per cent to 44 per cent to stay in the European Union.

Sinn Féin won seven seats in the 2017 British general election but despite entreaties from several quarters to use its votes to try to shaft the Brexiteers, it held to its “proudly abstentionist” policy. The SDLP lost its two seats, Alasdair McDonnell in South Belfast and Mark Durkan in Foyle, in that election.

If that voice is to be heard again at Westminster then it is most likely to emanate from South Belfast where Assembly member Claire Hanna is the SDLP candidate, and/or from Foyle where SDLP leader Colum Eastwood is seeking to oust Sinn Féin’s Elisha McCallion. Both have a chance of success.

Under the umbrella of Remain a deal was forged where Sinn Féin’s John Finucane got a free nationalist run in North Belfast while his party colleague Máirtín Ó Muilleoir has left a clear path for Hanna in South Belfast.

That has created the conditions for a big contest between three women candidates, the outgoing DUP MP Emma Little Pengelly, Alliance Assembly member Paula Bradshaw and Hanna, who is the clear favourite with the bookies.

Bradshaw argues that she has a good chance in this constituency, where a 70 per cent Remain vote was recorded, but the numbers appear to be against her and Little Pengelly. Alliance believes the votes of the Greens, who won 2,241 votes two years ago and who are not running to support the Remain campaign, will fall to Bradshaw more than Hanna.

The combined SDLP-Sinn Féin vote from 2017, however, is 5,000 ahead of the DUP vote and 10,500 ahead of Alliance. While all Sinn Féin supporters won’t plump for Hanna, it is reasonable to assume that many will given a strong nationalist and Remain voting desire to damage the DUP.

It is hardly surprising that some of the toxicity that is a feature of the overall election campaign in Northern Ireland, and indeed in Britain, has spread into this generally liberal and leafy constituency.

The DUP isn’t giving up, although some have questioned how it is fighting. For instance, not only has the DUP complained about the Shankill bomber Seán Kelly campaigning for Finucane in North Belfast but Sir Jeffrey Donaldson suggested he might be brought into South Belfast to work for Hanna.

Moreover, Little Pengelly, while less inflammatory, has painted the SDLP-Sinn Féin pact as tribalism rather than a Remain alliance.

Out on canvass with Hanna in Finaghy in South Belfast, she is dismissive of Donaldson and Little Pengelly’s complaints, characterising the “Bomber Kelly” claim as a “smear”.

What the agreement in North and South Belfast is about, she adds, “is taking out toxic DUP MPs who have misused the balance of power that they have had and who have destroyed relationships here and damaged our economy”.

This is a mixed middle-class area and Hanna gets a positive response, including from a number of people originally of unionist backgrounds but now more inclined to Alliance.

“I can win this,” Hanna tells them, implying that Bradshaw cannot. The argument gains some traction on the doorsteps.

The only negativity from Protestant doors is one complaint about the tendency of some SDLP politicians to constantly refer to “the North”. Hanna assuages her by responding that she has no problem saying “Northern Ireland”.

A woman standing with her husband and three young children says she won’t vote SDLP, which has described itself as a pro-life party, because of what appears now a rather ambiguous party position on abortion.

It will be interesting to see if Chris McHugh of Aontú, which has a clear anti-abortion position, gains any sort of foothold in South Belfast, and if he will pick up any of the Sinn Féin vote.

Michael Henderson of the Ulster Unionist Party, which has been criticised by the DUP for undermining Little Pengelly’s chances and also taken flak from loyalist sources, will be hoping to maintain some influence in what 15 years ago was a decidedly UUP constituency - another indicator of the changing politics in Northern Ireland.