Prime minister to set out exit strategy, with limited beginning, in televised address at weekend

British prime minister Boris Johnson says that the UK government hopes to ease some of the lockdown measures from Monday, May 11th as he addressed parliament for the first time since being hospitalized for Covid-19. Video: Reuters 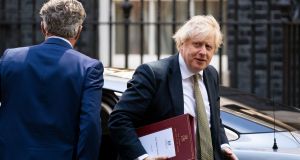 British prime minister Boris Johnson: said in first PMQs with new Labour leader Keir Starmer that he regretted the spread of the virus in care homes. Photograph: Will Oliver/EPA

Boris Johnson said on Wednesday that initial steps to ease the UK’s lockdown are set to be taken on Monday, as the prime minister confirmed he will set out his exit strategy in a televised address at the weekend.

Mr Johnson said he would set out his plan for the “second phase” of the UK’s fight against coronavirus on Sunday, adding the government could “get going” with some measures to ease the lockdown on Monday.

Initial relaxation of the lockdown is expected to be limited, and cover outdoor activity including exercise, with further steps coming later in May, when the government’s plan for a robust regime for testing people suspected of having Covid-19, and tracing of their contacts, is meant to be in place.

Mr Johnson announced the government’s new “ambition” to conduct 200,000 daily tests by the end of May, adding ministers intended to “go higher” once that goal was reached.

In his first prime minister’s questions in the House of Commons with Labour leader Keir Starmer, Mr Johnson said he regretted the spread of the virus in care homes.

Care homes have reported significant numbers of deaths and complained about a lack of testing for residents and staff, as well as inadequate supplies of personal protective equipment for workers.

“There is an epidemic going on in care homes, which is something I bitterly regret, and we have been working very hard for weeks to get it down and a huge amount of effort has been gone into by literally tens of thousands of people to get the right PPE into care homes,” said Mr Johnson.

Sir Keir focused on the government’s handling of the crisis, asking Mr Johnson whether its strategy could be judged a success when the UK death toll based on department of health figures had risen to almost 30,000.

On this data, the UK has become the European country with the most deaths, surpassing Italy. “How on earth did it come to this?” asked Sir Keir.

The PM rejected Sir Keir’s comparison of the UK’s death toll to other countries, acknowledging the “appalling statistics” but suggesting “the data isn’t there” to make accurate statements.

Mr Johnson also gave his strongest hint yet that there would be an inquiry to examine the government’s handling of the crisis.

“At every stage . . . we were governed by the overriding principal aims: to save lives and protect the NHS, ” he said. “There will be a time to look at what decisions we took and whether we could have taken different decisions.” – Copyright The Financial Times Limited 2020