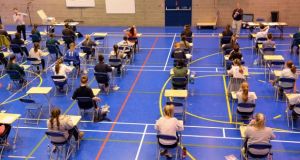 Department fo Education sources say option of awarding grades to students in the absence of exams will be discussedPhotograph: Eric Luke

Teachers’ unions have voiced concerns with Department of Education officials about the health implications for members if the Leaving Cert goes ahead later this summer.

Among the concerns relate to the safety thresholds for numbers that will be allowed in classrooms and exam halls, according to sources.

The executive committees of the Association of Secondary Teachers, Ireland (ASTI) and the Teachers’ Union of Ireland (TUI) both met on Wednesday night to discuss these issues and what role their members may play in grading Leaving Cert students if the exams are cancelled.

It followed a meeting attended by Minister for Education Joe McHugh on Wednesday, during which a number of alternatives to the written exams were discussed, including predicted or expected grades.

Proposals for teachers' grading their students for State exams have proved a source of major opposition among teachers’ unions over recent years.

However, well-placed sources said at last night’s meetings there was a recognition that an urgent alternative to the Leaving Cert is required and members need to be seen to support students.

The views of both unions will be crucial is determining what viable alternative assessment options can be put forward.

The development comes as a new survey shows an overwhelming majority of Leaving Cert students want the exams to be cancelled and replaced with estimated grades.

The survey of 24,000 sixth years by the Irish Second-Level Students’ Union conducted in recent days shows just 15 per cent want the exams to go ahead on July 29th.

By contrast, some some 79 per cent want the exams to be cancelled and replaced with predicted or estimated grades. The survey size represents a sample of almost 39 per cent of all Leaving Cert students.

Ciara Fanning, the union’s president, said the union will continue to advocate for and represent the interests of second-level students through its involvement in regular Department of Education meetings.

“This survey reinforces our mandate for clarification now - particularly as an increasing number of students are now in favour of cancellation and a thoughtful process established to ensure fairness and equity to all,” she said.

Another meeting of an advisory group on the exams including representatives of groups for teachers, schools and parents is due next week.

Following Wednesday’s meeting, Mr McHugh thanked those who took part and said there had been constructive discussion.

“Discussions here today will assist in making decisions regarding arrangements for the Leaving Certificate that have students’ best interests at heart and that are guided at all times by the public health advice.”

It is understood that a number of different types of assessment were discussed at Wednesday’s meeting, including the option of allowing students to opt for predicted grades and sit the exams themselves in July/August if they wish.

The practicalities of running the exams in the context of social distancing and public health advice were also discussed.

The advisory group of stakeholders included representatives of students, parents, teachers, school leadership and management bodies, the State Examinations Commission, the National Educational Psychological Service, the National Council for Curriculum and Assessment and the Department.

The Higher Education Authority also attended the meeting to assist feeding back to consultations it is involved with across the third level sector.

In addition, the advisory group received updates on the measures that have been put in place to support the wellbeing of students at this time.

Mr McHugh has said the Department of Education plan remains that the exams are due to go ahead on July 29th, subject to public health advice.