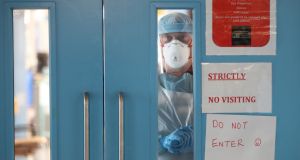 The Northern Ireland Executive is to make an announcement on loosening Covid-19 lockdown on Thursday, Sinn Féin finance Minister Conor Murphy has said.

“It is important to give at the earliest possible time a signal to people that there is light at the end of the tunnel and that we will begin to move towards a slightly more normal society again,” Mr Murphy said.

His comments came as the North’s Department of Health in Northern Ireland reported that 14 more people have died from coronavirus.

This brings the total number of fatalities to 418. These are mainly hospital deaths. It is expected that adding deaths in care and residential homes would increase this figure by a least one third.

The department also reported 53 new confirmed cases of Covid-19, leaving the total number of cases in the North now at 3,934.

At a Ministerial press conference on Wednesday, Mr Murphy said the Executive discussed loosening the lockdown rules on Monday and the various departments were engaged in exchanging papers on the matter.

The Executive is meeting on Thursday with the intention of making an announcement, he said.

Crime in Northern Ireland meanwhile has dropped by almost a third during the period of coronavirus, according to the latest statistics from the PSNI.

In what police described as an “exceptional” release of figures they compared the statistics for the five-week Covid-19 period from March 23rd to April 26th April with the same period last year.

They reported that crime fell in each of the main crime areas although the number of murders is up, with six homicides recorded in this period compared to two last year.

These figures don’t specify cases of domestic abuse. The PSNI however recently said that during the coronavirus crisis the incidence of such abuse was up by more than ten per cent.

More generally police found that violence against the person has fallen by more than one fifth and violence with and without injury have both fallen by around one third.

Sexual offences fell by a half and robberies by more than two fifths. For instance there were 106 rapes last year compared to 54 in this period.

Robbery of business properties dropped slightly from 14 to 12 while theft offences fell by nearly 50 per cent. Burglaries are nearly two fifths lower and shoplifting is three fifths lower. Criminal damage is down by more than one third.

Vehicle offences have fallen by more than two fifths. In one breakdown of the figures the PSNI reported that there were 17 instances of death or serious injury caused by unlawful driving last year compared to three in this period.

Drug offences fell by nearly a half and public order offences by more than one third.

And while politicians in Northern Ireland discuss whether, how and when to ease the lockdown rules the PSNI in the meantime has urged people in the North to “stay at home and only leave home when it is absolutely essential”.

Assistant chief constable Alan Todd reported that up to last Sunday (May 3rd) 374 fines were issued for breach of the Covid-19 regulations while 615 community resolution or warning notices were issued.