Trump dismisses rumours of US interest in British health service 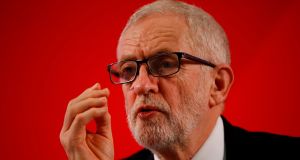 Donald Trump has dismissed fears that the National Health Service (NHS) could be on the table in a trade deal between Britain and the United States, saying he would not take it “on a silver platter”. Speaking at the start of a two-day visit to Britain for the 70th anniversary of the founding of Nato, Mr Trump said he wanted nothing to do with the NHS and had never thought about it.

During a visit to Britain last year, the US president said that everything, the “NHS or anything else”, would be on the table in trade negotiations, although he later said it would not. Labour last week published leak documents detailing six rounds of meetings between British and US trade officials during which issues such as drug pricing in the NHS were discussed.

Jeremy Corbyn said he planned to confront Mr Trump about the NHS at a Buckingham Palace reception on Tuesday night, telling him that none of Britain’s public services would be on the table in any post-Brexit trade deal.

“I’m asking for assurances about our public services because on a previous visit President Trump did say that everything had to be on the table including our National Health Service,” the Labour leader told the BBC’s Jeremy Vine Show.

Boris Johnson said before Mr Trump’s visit that he would prefer if the president did not get involved in the general election campaign. Mr Trump attempted to comply with that injunction, telling reporters he would stay out of the election and that he could work with any British leader.

“I don’t want to complicate it. I’ll stay out of the election. You know that I was a fan of Brexit. I called it the day before. I think Boris is very capable and I think he’ll do a good job.”

Mr Trump did not, in fact, predict Brexit the day before the 2016 referendum but welcomed it the day after the vote during a visit to his golf resort in Scotland.

Mr Corbyn on Tuesday apologised for Labour’s handling of complaints about anti-Semitism, something he had declined to do during an interview with Andrew Neil last week. He told ITV’s Philip Schofield that neither he nor his party would accept anti-Semitism in any form.

“Obviously I’m very sorry for everything that has happened. But I want to make this very clear: I am dealing with it, I have dealt with it, other parties are also affected by anti-Semitism. Candidates have been withdrawn by the Liberal Democrats, and the Conservatives and by us because of it. We just do not accept it in any form whatsoever,” he said.