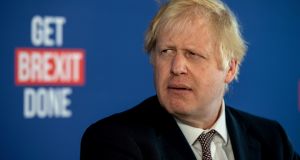 British prime minister Boris Johnson has promised to introduce new rules governing state aid to ailing companies after Brexit and to offer preferential treatment to British firms in public procurement. Speaking at an event in London with two other leaders of the 2016 Vote Leave campaign, Michael Gove and former Labour MP Gisela Stuart, the prime minister said he wanted to make it faster and easier for the government to intervene when businesses are in trouble.

“We’ll back British industry, by making sure we can intervene when great British businesses are struggling,” he said.

EU chief Brexit negotiator Michel Barnier has made clear that the “zero tariff, zero quota” trade deal Mr Johnson wants with the EU must also involve “zero dumping”. This means that Britain should agree to a “level playing field” to match EU social and environmental standards and state aid rules.

The prime minister said the new measures, which would comply with basic World Trade Organisation standards, would be consistent with level playing field conditions with the EU.

“Of course it’s compatible. And were there to be any issues arising then, as you know, under any big free trade deal, there’s a joint committee to arbitrate on whether some unfair subsidy or dispensation has been made. But it would be a committee of sovereign equals, as I’m sure you understand, such as exists between the EU and Canada, ” he said.

Ms Stuart appealed to traditional Labour supporters who voted Leave in the 2016 referendum to lend their vote to Mr Johnson in the forthcoming election in order to ensure that Brexit is delivered.

“I say to these traditional Labour voters who 3½ years ago voted to leave, that we can bring the country back together again, and we can unite, but that is not by voting for Jeremy Corbyn, ” she said.

“This is, after all, the Brexit election. And a vote for Boris Johnson this time around is a vote to get Brexit done. To do so does not make me and would not make you a Tory. Rather, it is the best option for all those who, like me, still share Labour’s traditional values but who voted to leave and who want certainty and an end to the stagnation, division and delay.”

Mr Johnson also rejected the accusation that he is running scared from a BBC interview with Andrew Neil, who subjected Mr Corbyn and SNP leader Nicola Sturgeon to tough questioning this week. The BBC rejected an offer from the prime minister to appear on The Andrew Marr Show on Sunday before he agrees to be interviewed by Neil.