Tributes paid to zookeeper killed by tiger in ‘freak accident’ 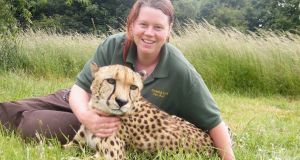 A zookeeper killed by a tiger on Monday in the UK has been described as the “shining light” of the Cambridgeshire zoo where she worked.

Rosa King (33) died at Hamerton Zoo Park near Huntingdon after a tiger entered the enclosure where she was working.

Garry Chisholm, a wildlife photographer in his spare time who knew King through visiting the zoo, said: “Rosa wasn’t just a keeper at Hamerton Zoo - she was Hamerton Zoo. She was the absolute central point of it, the focal point of it. She was the shining light of it. It revolved around her.”

Officers said they attended a serious incident at the zoo on Monday morning and that the female zookeeper died at the scene. The tiger entered the enclosure King was working in, with zoo management describing it as a “freak accident”.

“At no time did the animal escape from the enclosure,” said a Cambridgeshire police station. “The incident is not believed to be suspicious.”

Police and the Magpas air ambulance service were called to the attraction at 11.15am on Monday and visitors were asked to leave the site. The zoo said it would remain closed on Tuesday while an investigation was conducted.

Visitors were evacuated from the zoo at Steeple Gidding, amid rumours that a tiger was on the loose. But a spokesman for the attraction told the Guardian the incident did not involve an escaped animal.

Police confirmed that was the case, adding that no members of the public were in danger.

In a statement the zoo said: “We are sorry but our staff are too distressed to speak directly to the media as one of our colleagues was killed this morning. This appears to be a freak accident.

“A full investigation is currently under way and we hope that more details can be announced as soon as possible. At no point during the incident did any animals escape their enclosures and at no point was public safety affected in any way.

“All our thoughts and sympathies are with our colleagues, friends and families at this dreadful time.” The zoo confirmed it would remain closed on Tuesday as investigations into the incident continue.

One witness, Jeff Knott, from Cambridgeshire, said staff had been “a real credit” to the zoo during the evacuation. The 32-year-old told reporters: “We had been in the zoo since about 10.30am and heard/seen nothing until asked to leave about 11.45am. Staff were very calm and professional. All visitors around us were leaving in a very calm manner - no running, shouting or anything similar.”

Police said the tiger involved was “believed to be fine“.

Steve Backshall, host of the BBC nature programme Deadly 60, told Radio 4’s Today programme: “Protocols about how tigers are dealt with in captivity are incredibly stringent, because this is a very large and always potentially dangerous animal.

“When they’re fed, when their enclosure is cleaned, the animals are always taken away into a separate enclosure and clearly something has gone wrong with that process.”

Tigers experience an “artificial situation” in captivity, he said. “In the wild they’ll have enormous home ranges, they’ll very rarely come into contact with other tigers. In captivity, quite often they’ll be kept in relatively small enclosures with other tigers, and there’s no doubt that can cause artificial stresses within that enclosed population.”

The park took its first pair of Bengal tigers in 2001 and also keeps Malayan tigers in its Land of the Tiger attraction. The animals are kept in a house and paddock area. Visitors can see into the shelter through glass windows.