Zuma survives ANC attempt to oust him as head of state 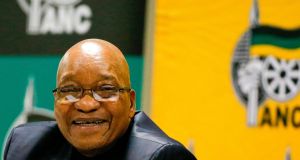 South Africa’s President Jacob Zuma has survived an attempt to unseat him as head of state in a crunch meeting of his ruling African National Congress that deepened the party’s split over mounting evidence of corruption during his presidency.

Mr Zuma’s allies fought off a bid to vote on sacking him as state president as the ANC’s powerful national executive committee met in Pretoria over the weekend, people familiar with the matter said.

Mr Zuma was backed by more than 50 of the 70 members of the NEC who debated removing him, South Africa’s News24 reported – underlining the president’s continued dominance of the highest levels of the ANC despite growing internal challenges over a series of scandals and electoral losses last year.

However, the NEC revolt marks increasing resistance to Mr Zuma’s efforts to determine his successor as party leader in a vote to be held later this year. The president is also facing calls for an independent investigation into the so-called “capture” of key state institutions by cronies under his leadership.

Mr Zuma survived a similar ambush at the NEC in November, even as claims of corruption in state contracts mounted – including allegations of his ties to the Guptas, an Indian-born business family who have been accused of influencing appointments to cabinet and the boards of public enterprises.

But the removal attempts at the NEC have been the most serious challenge to his leadership since he took office in 2009, with this weekend’s meeting the first since Mr Zuma fired Pravin Gordhan as finance minister in a shock cabinet reshuffle.

The removal last month of Mr Gordhan, a prominent critic of corruption at state-owned companies, led to Fitch and Standard and Poor’s cutting South Africa’s credit rating to junk and shook fragile confidence in an economy that is expected to register growth of barely 1 per cent this year.

The sacking sparked unprecedented public criticism of the president by senior ANC leaders including Cyril Ramaphosa, his deputy. Allies of the ANC in government, the Communist party and the country’s biggest trade union federation also called for his resignation.

Mr Ramaphosa is leading an underdog campaign for the ANC leadership against Mr Zuma’s preferred successor – his ex-wife Nkosazana Dlamini-Zuma, who enjoys the backing of several powerful ANC structures including its youth and women’s leagues.

Pressure on Mr Zuma over the Guptas also increased on Sunday, as South African media reported on leaked emails purporting to show that a company owned by the family paid for his ministers to stay at a luxury Dubai hotel, and that family members knew in advance of government decisions. A lawyer for the Guptas said the emails were “fake news”.

South Africa’s Sunday Times reported that the emails contained a draft letter to United Arab Emirates leaders prepared on behalf of Mr Zuma announcing that “my family has decided to make the UAE a second home”. Mr Zuma’s office said that the letter was “pure fabrication”.