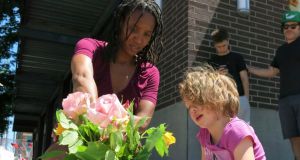 After pressure mounted on Donald Trump to comment on the racist attack in Portland, Oregon, that left two men dead on Friday, the president said on Monday that the attack was unacceptable.

Trump’s words were broadcast on the @POTUS Twitter account, rather than the more commonly used @RealDonaldTrump, on Monday morning, shortly before Trump marked Memorial Day with a speech at Arlington National Cemetery, in Virginia.

“The violent attacks in Portland on Friday are unacceptable,” the tweet read. “The victims were standing up to hate and intolerance. Our prayers are w/ them.”

Taliesin Myrddin Namkai-Meche (23) and Rick Best (53) were fatally stabbed on Friday while intervening to stop a racist attack on a Muslim teenager on a commuter train.

The pair have been honoured as heroes by Portland’s mayor and the FBI, and were the subjects of a candlelit vigil in the city on Saturday night. The president had until Monday remained silent, despite tweeting 10 times on Sunday on topics including healthcare, fake news and the Montana special election that was won last week by the Republican candidate after he had assaulted a Guardian reporter.

The violent attacks in Portland on Friday are unacceptable. The victims were standing up to hate and intolerance. Our prayers are w/ them.

Throughout Sunday, pressure mounted on social media for Trump to make a statement on the attack, which was allegedly carried out by a suspected white supremacist, Jeremy Christian (35).

Dan Rather, the veteran American journalist, led the charge on Facebook, calling on Trump to acknowledge the “brave Americans who died at the hands of someone who, when all the facts are collected, we may have every right to call a terrorist”.

Rather wrote in an emotional post that although the story “may not neatly fit into a narrative you pushed on the campaign trail and that has followed you into the White House”, the men were “not killed by an undocumented immigrant or a ‘radical Islamic terrorist’. This ‘extremism’ may be of a different type than gets most of your attention, or even the attention in the press. But that doesn’t make it any less serious, or deadly,” he wrote.

Rather finished his post by noting that Portland might not be on the president’s radar because it is a liberal city, but “it is still an American city. And you are its President.”

By Sunday night the post had had 370,000 likes and 8,7000 comments. Rather’s tweet linking to the Facebook post had been liked 15,000 times. His sentiments were echoed by scores of Twitter users who were dismayed by the president’s failure to speak about the double murder.

One of the teenagers whom Best and Namkai-Meche stepped in to protect from the attack paid tribute to the men. Destinee Mangum, who was travelling with a Muslim friend when the attack began, said the men had saved her life.

“They lost their lives because of me and my friend, and the way we looked,” she told KPTV in Oregon. “I just want to say thank you to them and their family, and that I appreciate them. Without them, we probably would be dead right now.”