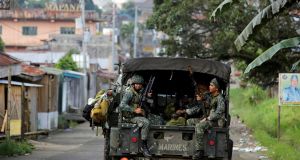 Police and security services have imposed a night-time curfew and increased their presence in a second Philippine city following reports that Islamist militants fighting fierce battles in Marawi might pose as civilians to sneak out and open a new front.

More than 90 per cent of Marawi’s 200,000 population have fled a week of street clashes and aerial strikes to Iligan City, 38km (24 miles) to the north, where authorities have implemented a 10pm to 4am curfew.

Posting on the city’s Facebook page, police had said curfews were not a complete lockdown but “containment action” – using both stationary and mobile checkpoints as well as “police visibility to negate the occurrence of same incident at Marawi City”.

The extended curfew followed comments from Col Alex Aduca, chief of the Fourth Mechanised Infantry Battalion, who told local radio that some rebels had been caught trying to get into Iligan.

“We don’t want what’s happening in Marawi to spill over in Iligan,” he said.

A spokesperson for the provincial government of Lanao del Sur also said the army had arrested a suspected militant trying to flee Marawi. The man, who was in his 20s, had fingers smelling “of gunpowder”, Zia Alonto Adiong said.

The spokesperson encouraged residents to help the military by conducting citizen’s arrests of suspected members of the Maute, the Islamic State-linked group that took control of several neighbourhoods of Marawi last Tuesday.

“If anybody thinks that he or she is physically capable of apprehending a member of the Maute, then do so. Bring that criminal to us and we will do the necessary actions,” he said.

Security forces have made efforts to contain much of the wider region. Police as well as soldiers, in camouflage and carrying assault rifles, searched trucks and checked ID cards at two checkpoints between Iligan and the provincial international airport.

More than 60 militants, 20 security forces personnel and 19 civilians have been killed since Maute rebels flooded through Marawi, a lakeside city in the centre of Mindanao, a semi-autonomous province home to several insurgent factions.

While on-off fighting is common in the island state of 22 million, the overnight rampage by an Islamic State-linked group and its ability to hold ground for a week in defiance of military attack helicopters and artillery barrages presents a dramatic turn.

President Rodrigo Duterte has imposed martial law in the area and told troops that he will protect them if they commit abuses during the conflict, including rape, leading to an outcry from rights activists and some lawmakers.

The clashes started after security forces tried to capture Isnilon Hapilon, an Islamist militant leader who is the subject of a $5 million FBI reward and endorsed by Islamic State, which seeks to to establish a presence outside the Middle East. He is believed to be a senior leader in a coalition of Islamist insurgent groups, including the Maute.

Rebels struck back surprisingly swiftly, quickly taking up sniper positions that have since bogged down the military’s efforts to completely retake the city.

Major General Rolando Bautista, the commander who ordered the raid, said insurgents had been planning for several weeks to seize Marawi, and the raid “triggered” their attack early.

“We did not expect the outcome, the reactions,” Bautista told local news outlet Rappler, suggesting the militants had been well-prepared.

The Maute group remained in nine of the city’s 96 sub districts, according to the military. Thousands of civilians remain stranded in the crossfire and bombardment, with little food or water and no electricity.

The bodies of eight people, said by the army to be civilians executed by the Maute were found in a ravine on Sunday. Most had been shot in the head and some had their hands tied.