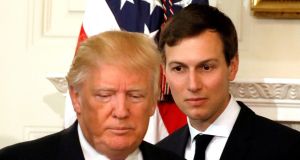 US president Donald Trump has defended his senior advisor, saying he is “doing a great job for the country”. Photograph: Kevin Lamarque/Reuters

The White House has stood behind senior adviser Jared Kushner, despite reports that he sought to arrange covert communications with Russia in the weeks preceding Donald Trump’s election as president.

Following a nine-day trip to the Middle East and Europe, Mr Trump returned to Washington to face a storm of media reports about Mr Kushner’s apparent inappropriate links with Russia, including claims that he sought to set up a back channel with Moscow, using the Russian embassy, in December.

In a statement issued to the New York Times, Mr Trump said that his son-in-law was “doing a great job for the country”.

“I have total confidence in him. He is respected by virtually everyone and is working on programmes that will save our country billions of dollars. In addition to that, and perhaps more importantly, he is a very good person.”

There has been no denial of the reports by the White House and a number of senior administration officials backed Mr Kushner over the weekend. Homeland Security chief John Kelly said the latest scandal to engulf the administration was “no big deal”.

“Just because you have a back channel, if indeed that’s what Jared was after, doesn’t mean that he then keeps everything secret. I don’t see any big issue here,” he said in a TV interview on Sunday. Separately, he told Fox News: “Any time you have channels of communication with a country, particularly one like Russia, I wouldn’t criticise it.”

Mr Trump, who participated in the annual Memorial Day ceremony at Arlington Ceremony on Monday, is said to be considering a shake-up of the White House administration, with a possible sidelining of press secretary Sean Spicer and other key officials expected in the coming days.

The appointment of a special counsel to lead the FBI investigation into Russian interference in the election, has also prompted the president to seek outside legal advice, with the president turning to his private lawyer, Mark Kasowitz, for advice.

There has been no indication that Mr Kushner, who returned from Mr Trump’s first foreign trip as president with his wife Ivanka on Friday, may be stepping down from his role as adviser. The 36-year-old property heir holds a senior advisory role within the Trump administration, playing an increasingly important role in the development of Mr Trump’s foreign policy.

Prominent Republican senator John McCain on Monday raised concerns about the latest controversy about Russia. “My view of it is that I don’t like it. I know some administration officials are saying this is standard procedure. I don’t think it’s standard procedure prior to the inauguration of the president of the United States by someone who is not in an appointed position.”

Prominent Republican senator Lindsey Graham offered a different perspective however, suggesting that the media reports could have been manufactured by Russia.

Separately, Chuck Grassley, the Republican chair of the Senate Intelligence Committee, called for an investigation into a property deal involving the company run by Mr Kushner’s family which was marketed to Chinese investors.

Monday’s ceremony at Arlington Ceremony marked Mr Trump’s first public appearance since returning to Washington from a nine-day foreign trip. Addressing an audience which included relatives of many who died in military service, he paid tribute to those who died in service.

“We only hope that every day we can prove worthy, not only of their sacrifice and service, but of the sacrifice made by the families and loved ones they left behind. Special, special people.”