Macron talks tough as Putin goes on defensive in Versailles

French and Russian leaders spar over Ukraine, Le Pen and chemical weapon use 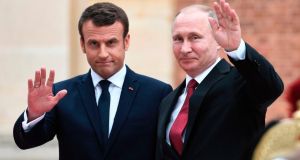 Though the tone remained cordial throughout, Emmanuel Macron, the youngest democratically elected head of state in the world, and Vladimir Putin, the modern-day czar who has ruled Russia for the past 16 years, spoke with unaccustomed frankness about the issues that have poisoned contemporary Franco-Russian relations at a press conference in Versailles on Monday.

Mr Macron, in office just three weeks, was more direct than Mr Putin. He threatened twice to retaliate by force for the use of chemical weapons in Syria. Former presidents Barack Obama and François Hollande had backed down from the same threat at the time of the first major chemical attack in August 2013.

While Mr Macron called for greater co-ordination with Russia in the fight against Islamic State, also known as Isis, he said there were two issues on which he would not budge.

“There is a clear red line on our side: the use of chemical weapons by anyone,” Mr Macron said. The regime of Syrian president Bashar al-Assad has repeatedly used chemical weapons with impunity. Moscow and Tehran, who have kept Assad in power, stand accused of complicity in the attacks.

“All use of chemical weapons will be the object of reprisals and of an immediate riposte on the part of the French,” Mr Macron said.

Mr Macron also demanded uninterrupted access for humanitarian groups in Syria, and permanently open evacuation routes. Aid workers have been targeted by all sides in the Syrian war. “Innocent civilians cannot be the victims of our collective incapacity to take sides,” the French president said.

On the situation in Ukraine, Mr Macron said he would inform German chancellor Angela Merkel within hours that he and Mr Putin had agreed to convene with the leaders of Germany and Ukraine in an attempt to revive the dormant Minsk accords. The group of four leaders which deals with the conflict in Ukraine is collectively known as the Normandy format.

Mr Putin ignored Mr Macron’s comments on chemical weapons and attacks on humanitarian organisations in Syria. “The most important thing is the fight against terrorism . . . this plague of the 21st century,” he said. “The French president proposed a working group to launch co-operation against the terrorist threat that is particularly dangerous for us and for western countries, including France. ”

Russia has been accused of responsibility for an extensive cyberattack against Mr Macron’s campaign, two days before the election. Asked about the allegations, Mr Putin assumed the look of the KGB interrogator he once was.

“Look how your question was formulated,” Mr Putin said in an accusatory manner. “You say ‘one says that’ . . . Who? On what basis? How do you expect me to comment on unconfirmed suppositions?”

Mr Putin defended having received Ms Le Pen at the Kremlin in March. “Her ideas about the identity of the European people are not ill-founded, in my opinion . . . I don’t see in the name of what we would have refused . . . It would be strange to reject someone who wants good relations with Russia.”

Mr Macron turned sidewise to look intently at Mr Putin when the Russian leader added: “But that doesn’t mean we tried to affect the outcome of the elections.”

Media close to Mr Putin led a vicious campaign against Mr Macron, portraying him as a greedy banker counting stacks of banknotes, calling him a “sodomite” and his wife Brigitte a “paedophile”.

Asked why he had banned Russia Today and Sputnik from his campaign headquarters, Mr Macron said, “It is serious that foreign press organs, under what influence I do not know, interfere by spreading grave untruths in a democratic campaign . . . Russia Today and Sputnik did not act as journalists, but as organs of lying propaganda, no more, no less.”

The G7 summit in Sicily last weekend considered increasing sanctions against Russia over the standoff in Ukraine. Mr Macron said he hopes that will not be necessary, that the situation will stabilise, or better yet, “de-escalate”.

Mr Putin liked the question about sanctions. “In no way do sanctions help to solve the crisis in eastern Ukraine,” he said. “I launch an appeal. We must end all these limitations on international exchanges . . . Only international trade unhampered by any constraint can improve the lives of our citizens.”