Moscow tells elderly to stay at home as coronavirus surges back 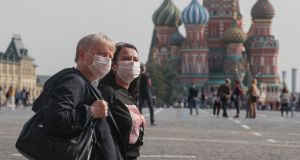 Moscow’s mayor has urged its older residents not to leave home and called on firms to allow staff to work remotely, in a bid to blunt a sharp rise in Covid-19 cases as Russia braces for an autumn and winter in which coronavirus could thrive.

“According to doctors, the overlap of two diseases – the common cold and coronavirus – is very dangerous and could have serious consequences,” Mr Sobyanin said.

He told Muscovites aged 65 and over and those with chronic health conditions to leave home only “if absolutely necessary” and to avoid contact with people from other households. They should ask friends or relatives to shop for them, but there will be no restrictions on going outside for exercise, he added.

Mr Sobyanin also recommended that companies allow staff to work from home wherever possible and to follow strict hygiene rules in the workplace, with social distancing and temperature tests and Covid-19 tests for employees.

“The virus isn’t beaten yet and the pandemic continues,” he wrote on his blog. “None of us want to go back to the tough restrictions of this past spring. I hope we can avoid that. But only if we look after ourselves and others.”

Russia’s total of 1.14 million coronavirus cases is the fourth highest in the world. The country’s official count of 20,056 deaths from Covid-19 is viewed with some scepticism however; France, by comparison, has recorded less than half as many cases as Russia but about 11,000 more fatalities.

Russian president Vladimir Putin has given regional leaders broad powers to tackle the pandemic. He told governors this week that the coronavirus outlook was somewhat better in Russia than elsewhere in Europe, while warning that “if we relax, the situation could change completely”.

Kremlin spokesman Dmitry Peskov said on Friday there were currently no plans to impose tighter restrictions across Russia, which has high hopes for the Sputnik V vaccine that is now undergoing large-scale clinical trials. Officials say 20 countries have pre-ordered the vaccine, which has shown promising early results.

Even though Sputnik V has not been fully tested, Moscow has hailed it as the world’s first registered coronavirus vaccine, and several senior Russian officials and one of Mr Putin’s adult daughters have reportedly received it.

Czech health minister Roman Prymula has warned that the country could soon face a shortage of ventilators if the virus continues to spread at its current rate, and said new restrictions would be announced next week.