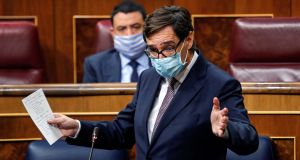 Spanish health minister Salvador Illa has urged the imposition of measures that are necessary to ‘take control’. Photograph: Emilio Naranjo/EPA

Spain’s response to the worst resurgence of coronavirus in Europe was plunged into chaos on Friday as Madrid regional authorities defied a national government call to put the whole capital city under new restrictions.

The dispute highlights the governance crisis that has accompanied the pandemic in Spain and the lack of political consensus over how to handle it.

At a press conference Salvador Illa, Spain’s health minister, urged Madrid to impose measures that he said were necessary to “take control”. But, even as he spoke, a health official for the regional administration – run by political rivals of the Socialist-led national government – told reporters it would not comply, opting instead to take more modest steps.

Under Spain’s decentralised form of government, each of the 17 regional governments operates its own health system.

With more than 48,000 coronavirus cases registered in the past two weeks, the Madrid region is dealing with a much higher rate of infection – on average 722 per 100,000 inhabitants – than the whole of Spain, itself the worst hit country in Europe, with 282 cases per 100,000.

Almost one in four tests for the virus in Madrid is currently positive. According to official statistics, 40 per cent of the region’s intensive care beds are now occupied by Covid-19 patients, although many doctors say the true proportion is about twice as much, since other parts of hospitals are being used as ICUs on an emergency basis.

On Friday Mr Illa asked for restrictions imposed by the Madrid authorities this week on 850,000 people in the most infected areas to be extended to the whole city – which accounts for about half of the broader region’s 6.6 million population. The measures prohibit people from leaving their neighbourhoods other than for work, educational or other specific reasons.

“I don’t want to hide from you that we are going to have some very hard weeks in Madrid but we can bend the curve if we do what we need to,” Mr Illa said. He also called for the restrictions to be imposed on other towns in the region with high infection rates, and for clear instructions by the regional authorities for citizens throughout the Madrid area to avoid all unnecessary travel.

The regional administration said there was no proven need for such wide-ranging curbs just four days after its targeted restrictions had taken effect.

Instead, it said it was extending the existing restrictions, which affect 37 neighbourhoods, largely in poorer districts in the south of the city, to a further eight zones with about 167,000 inhabitants, accounting for an additional 2.5 per cent of the region’s population and 3.8 per cent of its cases. As a result, it said, an overall 15 per cent of the region’s inhabitants, and 27 per cent of cases, would be affected by the expanded restrictions – much less than the levels sought by the central government.

“Nothing has happened in Madrid that requires us to change our approach,” said Antonio Zapatero, a top regional health official. “We are convinced that there has to be an improvement in Madrid, but it can’t happen in two days.” He added that the regional government was buying five million rapid antigen tests, which identify proteins that make up coronavirus.

The confrontation comes just four days after Pedro Sánchez, Spain’s prime minister, held a high-profile meeting with Isabel Díaz Ayuso, head of the Madrid regional administration, at which the two vowed to work together.

“This is a further indication of our governance crisis, with the regional administration and the central government unable to co-operate in a badly designed system that falls far short of federalism,” said Miguel Otero, an analyst at the Elcano institute, a think-tank. He argued that, like right-wing politicians elsewhere in the world, Ms Ayuso was resisting taking more drastic health measures because of their economic impact.

Under the Spanish constitution, the central government can take direct control over a region – as it did in 2017 over Catalonia – or assume emergency powers , as it did during the pandemic’s first peak in March. But Mr Illa said the responsibility for dealing with the crisis in Madrid “corresponded to the regional government”. – Copyright The Financial Times Limited 2020