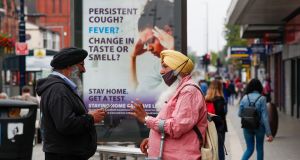 Locals in West Bromwich on Thursday. New modelling by University College London’s Karl Friston suggests that Britain has only two or three weeks to improve contact tracing before the virus spreads out of control. Photograph: Darren Staples/Bloomberg

Boris Johnson has warned that a second wave of coronavirus infections in the UK is inevitable, amid reports that his government is considering a two-week national lockdown within weeks. The country recorded 4,322 new positive cases of coronavirus on Friday, an increase of almost 1,000 on the previous day and the highest figure since May 8th.

“Obviously, we’re looking very carefully at the spread of the pandemic as it evolves over the last few days and there’s no question, as I’ve said for several weeks now, that we could expect [and] are now seeing a second wave coming in. We are seeing it in France, in Spain, across Europe – it has been absolutely, I’m afraid, inevitable we were going to see it in this country,” Mr Johnson said during a visit to the Vaccines Manufacturing and Innovation Centre construction site near Oxford.

His government this week reduced the number of people who could meet socially indoors or outdoors to six, and more than 13 million people are living under local lockdowns in parts of the country where infections are above average. MPs this week discussed introducing what they describe as a “circuit-break” involving more nationwide restrictions for a period of two weeks around the schools’ autumn mid-term break next month.

The measures, which could include reducing opening hours for restaurants and bars or even closing them, are designed to slow the spread of the virus while allowing schools and workplaces to remain open.

“We want to try and keep all parts of the economy open as far as we possibly can – I don’t think anybody wants to go into a second lockdown, but clearly, when you look at what is happening, you have got to wonder whether we need to go further than the ‘rule of six’ that we have brought in on Monday, so we will be looking at the local lockdowns we have got in large parts of the country now, looking at what we can do to intensify things that help bring the rate of infection down there, but also looking at other measures as well,” Mr Johnson said.

“What I will say is, as we go forward, we will be explaining in great detail to people what the scientific background is, what the epidemiology is saying and really how we propose to do it.”

New modelling by University College London’s Karl Friston suggests that Britain has only two or three weeks to improve contact tracing before the virus spreads out of control. Independent Sage, the group of medical and scientific experts who published the research, said indoor service in pubs and restaurants should be suspended, working from home should be encouraged where possible, and indoor socialising should be limited to members of three households.

“We have never been in control of tracking the virus and now it’s got completely out of hand. If we sit on our hands for a couple of weeks it will be way beyond our ability to handle it without a lockdown,” the group’s chairman, former chief medical officer David King, said.